Campaigner, 90, has path steps named in his honour 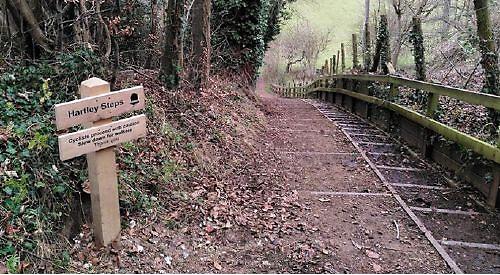 A SET of steps in Whitchurch which improved the safety of a footpath has been formally named in honour of the man who campaigned for them.

A sign has been installed on the Hartslock Bridleway naming the steps after Eric Hartley, 90.

As the path is steep at this point, the sign also reads: “Cyclists proceed with caution. Slow down for walkers. Thank you.”

The double stepway was installed 10 years ago to make the path safer for walkers, cyclists and horse riders following a series of accidents.

The footpath connects Whitchurch to Hartslock Wood and Goring and is on the Thames Path.

It became difficult to negotiate in 2011 when Oxfordshire County Council removed the timber steps that had deteriorated.

The slope which was left behind led to people being injured and many chose to avoid the area.

Mr Hartley, a retired safety officer who lives in in Swanston Field with his wife Betty, badgered the council for 16 months until the steps were installed.

A competition held at the 2012 Whitchurch fete named them the Hartley Steps but this is the first time signage has been installed.

The parish council was concerned that Thames Path cyclists might be unaware of the danger on their approach.

The signs were installed by volunteers working under the supervision of Lucy Duerdoth, of the county council’s National Trials volunteer project office.

Mr Hartley, who celebrated his 90th birthday on January 9, said: “I’m delighted to see the signs go up with my name. It was a long time ago that it was decided at the village fete but the parish council has now decided to put the name up and that’s wonderful.

“The steps are very good and have worked very well. People come through and I think it’s the only dip on the Thames Path so they’re very grateful they’re there.

“I haven’t got up there myself to see the signs yet but people have been sending me photos, which is lovely and I will be pleased to go up and see them.”

He said that in 1996 the bridleway became part of the Thames Path and over the following years the condition of the steps deteriorated as there was much more use of the route by cyclists and some complaints were made by the British Horse Society. In 2010 the county council and National Trails decided to remove them.

Mr Hartley said: “They did this without determining how the steps were to be replaced and without giving us prior notice of their intent.

“Suddenly our local population found themselves denied their previous access. Many horse riders considered the slope and its surface too dangerous and they, too, ceased to use it.

“Correspondence with the council’s countryside services, National Trails and Natural England was almost continuous for 16 months and we received numerous replies indicating a speedy resolution.

“We informed them of the need to replace the steps and to provide a handrail and that the surface they had provided was unsuitable.

“At long last, they too realised that they had created a problem rather than solved one.

“Following another more serious accident, the 72 new steps and a smart handrail were installed.”

In 2019 Mr Hartley received the first Whitchurch Award in recognition of his contribution to the community. He has published seven editions of a guide to walks around the village. He grew up in Sheffield and worked as an electrical engineer. He moved to Whitchurch in 1964 and joined the parish council.