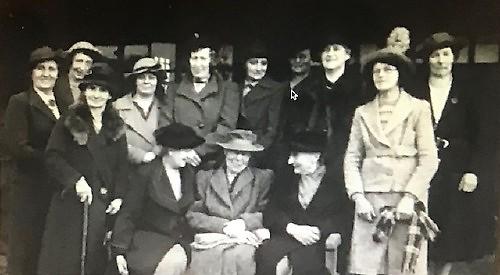 The WI was founded in Canada in 1897 at a time when women had very few rights, politically, socially, educationally or financially.

It created a monthly meeting space for women, organised by women and where all women were equal. Years before all women were enfranchised, they were voting in a secret ballot to elect their president in WI meetings.

Grace Hadlow, a founder member, captured the essence of the WI: “The Women’s Institute is for all alike: rich and poor, learned and unlearned, all have the same privileges and the same responsibilities.”

Education, equality and companionship were the goals.

In Britain, the first WI was founded in 1915 during the First World War but it wasn’t until after the war ended in 1918 that the movement really started to grow.

Even so, many WIs didn’t survive those first few years.

Greys WI was born in March 1920 and at the first meeting a president (Mrs Wolferston), treasurer, secretary and committee were appointed.

To begin with, Greys WI had no settled home so the monthly meetings were held in members’ houses.

The secretary at the time commented: “We met at eight different houses. The committee looks forward to a settled meeting place.”

This was a hope not to be fulfilled for six years.

Nevertheless, the overall pattern of lectures, demonstrations, competitions, exhibitions, outings, teas and social gatherings of a WI meeting was established. Never underestimate the importance of tea and chat.

From the beginning, this contrast between what the purists felt were the important objectives of the wider WI movement and what the new members actually enjoyed is reflected time and again.

In 1923 the secretary wrote: “Members could ask their friends to come and join and so take part in a great movement active over all England... for the betterment both educationally and socially of the life of women.”

Even in 1929: “The meetings have been interesting and jolly, and those who came enjoyed them, but we would like more members to take an interest in our movement.”

The lectures reflected this. In 1920 lecture topics ranged from infant and child welfare to the aims of the WI, in 1922 millinery to Shakespeare’s women, in 1925 child psychology to Russian folklore, in 1927 big game shooting to care of the teeth and feet. An interesting range of topics.

Yet members had a lot of fun. The annual outings, beloved by members to this day, included a steamer trip to Windsor, a boat trip to Hurley, a char-a-banc to London to see The Desert Song and a picnic in Lambridge Wood for members and their children.

In 1923, a drama club was started, with immediate success. Four plays were “got up”, fun and hard work for the performers and much enjoyed by the audience.

In 1924, two short plays were taken to the Oxford Exhibition but gained only a 3rd class certificate.

However, in 1927 the Greys Drama Group stormed the Oxford Exhibition, winning the dramatic competition and a silver cup with excerpts from Romeo and Juliet.

Greys reached out to the village of Rotherfield Greys in many ways. At the annual flower show at Greys Court the WI had a table of crafts and made the teas.

In 1923 Greys held a successful baby show with judges from Reading. Everyone was “very pleased at the care and attention bestowed upon the children”.

Greys helped to organise a cat show “with 10 unwilling competitors” and an allotment show, made teas for the village flower show and even started a folk dancing club — “fewer men joined than we hoped”.

On Armistice Day in 1926, the drama club performed a play, The Unknown Warrior, to the whole village.

“The hall was well filled by a sympathetic and appreciative audience who joined in the singing of O, Valiant Hearts, Jerusalem and the National Anthem.”

In 1926 Greys volunteered to be responsible for caring for the war memorial, supplying fresh flowers throughout the year.

Throughout the Twenties a working party led by Mrs Wolferston created a flow of garments which were sent to local hospitals and charities.

In 1928 a potato growing competition produced 300lb of potatoes, which were sent to the Henley Memorial Hospital. There is no record of the response of the hospital.

In 1926, after many years of fundraising, the new village hall opened. At last, Greys WI had a permanent home and we are still there.

Meanwhile, Greys WI and Rotherfield Greys village are joining together to hold an exhibition in Greys Green village hall on March 19 and 20, 2021.

This will celebrate 100 years of our WI and its village. Entry will be free and everybody is welcome.

We will care for your items and return them to you.

WITH no meetings happening because of coronavirus outbreak, we are having to rely on other means of keeping in touch across our membership of 38.

Most of us are using the telephone and email, making sure in particular that those living on their own are able to communicate at least once a week with a fellow member. Most, if not all, members will by now be staying at home.

Some will be walking locally, with or without partners and dogs. Our countryside is so beautiful at the moment and this is a blessing.

The daffodils have given way to a riot of bluebells in the local woods and the blossom on the trees gives a promise of things to come.

The wildlife is probably enjoying the cleaner air as a result of less pollution from traffic.

We are able to look for the positives and try not to dwell on the news reports too long, aside from them making us even more careful and, of course, being so sorry for those hit by tragedy and appreciating the NHS even more than we did already.

Members of our group who are on WhatsApp are showing some great photos of their gardens and walks.

Some even had a virtual craft meeting, talking about their latest craft item that they would have been doing together over coffee and cake normally.

Our netball players are being catered for online with a routine organised by England Netball so they can keep their interest and exercise up. Some of us have joined Zoom groups with other members outside our WI, which is proving very interesting.

The farmers among us still have animals to care for, of course.

A lot of our members do some kind of voluntary work as well as WI.

Most of these activties have had to be postponed including charity shop work, the Wyfold Riding for the Disabled group, church flowers, village hall management, coffee mornings and lunches for visitors and the largest section who volunteer as guides, do tour talks, researchers, sewers, bakers and gardeners at the National Trust houses, Greys Court and Nuffield Place, which have had to close.

So our members find themselves with more time on their hands to perhaps help others locally if they are able to shop without going too far out of their way, for example, and are young enough!

These members at least have company and may or may not be relishing the extra time they are spending with families in their own homes.

Some will also be working from home, or attending meetings on Zoom and the like, or even going into a place of essential work.

Our two members on the News & Views team are still managing to produce a version of the monthly WI magazine. It is digital so can only be accessed by those with computers but this is the vast majority of members, certainly the case in our WI.

The magazine is smaller than usual because of the lack of meetings but it is interesting to read the letters telling how other WIs are keeping in touch.

One member, Jane Probitts, has shared a story with us about a cherry tree that Stoke Row WI planted in the orchard next to Maharajah’s Well in the village for the millennium and it is worth repeating here.

She recalls how during the millennium picnic she and the then president Sue Bull went to put a plaque in the ground by the spindly little tree and a wooden fence round it to protect it from the cows that used to graze there at the time. Jane continues: “We were inside the fence focused on the job in hand when we became aware of company... some inquisitive young cows were pushing their wet noses between the fence, getting a little too close for comfort, while their mums stood protectively behind them.

“We were surrounded. No mobile signal in Stoke Row back then and no one around to come to our aid. It took us a good half hour to pluck up courage and negotiate our way out of the situation and scurry back home.

“Twenty years later you can now see what a magnificent tree it has become. No cows graze in the orchard now and the fence is no longer needed.”

WHAT is your image of the WI? Whatever it was, it has certainly changed during the current difficulties.

Members of the Federation of Oxfordshire WIs have tackled the situation head-on with a bold and inviting initiative.

The Federation is offering free talks and demonstrations of interest to its members.

The first talk was called “The miracle of Bletchley Park” and given by Gillian Cane to 75 members who joined on Zoom. There was an informative question and answer session at the end.

Further talks and demonstrations on history, crafts and gardening are coming up in the near future.

The speed at which the Federation has adapted to the current situation is amazing. It must be immensely proud of its members who are also having local village and town WI meetings by electronic means.

The Federation is keen to deliver what is needed during tricky times and remains a constant in the future of uncertainty.

The WI, as we all know, is a ready-made supportive community for women in the 21st century. For more information, visit www.oxfordshirewi.co.uk