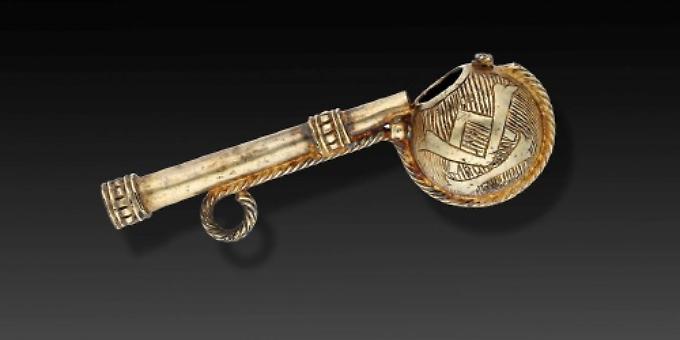 AN extremely rare 16th century hawking whistle will be offered for sale at auction in March at Mayfair’s specialist auctioneers Dix Noonan Webb.

Few examples of hawking whistles have ever come to auction, this particular whistle being exceptional not only because of its superb condition but also the fact that it is fashioned in gilded silver.

In 1217, at the beginning of Henry II’s reign, the Carta de Forest (Charter of the Forest) was signed, granting rights to all free men, which included the use of birds of prey for hawking.

At this time, hawking became an important means of catching game as well as a popular sport.

Hawking or falconry whistles from the medieval and Tudor period are very rare, with only four other examples in silver listed on the Portable Antiquities Scheme, whilst another three are in the Museum of London collection.

None are gilded or comparable in refinement to this example. Whistles of similar form have been found in the River Thames made of pewter, dating from the 14th and 15th centuries.

They were also used by pilgrims, believing whistles to have apotropaic abilities — the power to avert bad luck — as well as being worn as jewellery or sewn on to garments, and also for the purpose of summoning servants and hounds.

Grand hunting parties were hosted by kings and lords, and hawking became an essential element of personal and national prestige, with retained falconers accompanying their masters, and the “Master of the Mews” position reserved for the king’s best falconer.

A beautiful gold hawking whistle that was given by Henry VIII to Anne Boleyn can be seen in the Victoria & Albert Museum.

By around 1600, falconry had reached its zenith and was regarded as the “proper sport for a gentleman”.

However, by the 17th century, the success of firearms eventually superseded the demand for falconry as a hunting tool.

This whistle was reputedly discovered in the manor of Smallbridge in Bures St Mary, Suffolk, the home of the Waldegrave family, where Elizabeth I was entertained for two days by Sir William Waldegrave in 1561.

The whistle will be included in Dix Noonan Webb’s auction of jewellery, antiquities and objects of vertu on Tuesday, March 17. It has a guide estimate of £6,000 to £8,000.