Teenager 'shocked' to be Mayor's cadet after just 18 months 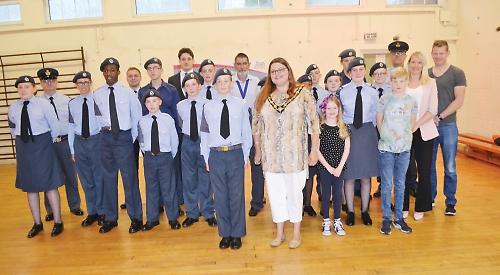 A BOY from Sonning Common says he was “shocked” to be chosen as the Mayor of Henley’s cadet.

Harry Ellis, 14, was formally invested at a meeting at the cadet’s headquarters in Friday Street on Monday last week.

Mayor Kellie Hinton presented him with a certificate and a badge of office.

He was watched by his parents Brian and Lisa and the rest of the 447 squadron.

His duties include attending official events with the Mayor, such as the annual Remembrance Day service, as well as talking to members of the public.

He joined the cadets 18 months ago after being urged to do so by friends who were already in the squadron.

Harry said: “I thought I would try it out and it became really fun. When I was told I was going to be the Mayor’s cadet I was very shocked but happy and honoured.

“I got to meet her and do lots of activities. I did the civic ceremony on Sunday which was nerve-wracking but really good. I’m really excited for the rest of the year.”

Cllr Hinton said: “I’m really proud to have an air cadet as my cadet this year. I’ve been on the civic committee for five years which is most of my time as a councillor.

“I’ve seen how the squadron has grown under Flt Lt Tim Keating and his team — they have turned it around and improved so much over the last few years. To have an air cadet as my Mayor’s cadet and raise awareness is a wonderful opportunity.”

Cllr Hinton said that she would offer her support to Chiltern Edge School, which is under threat of closure after being put into special measures by Ofsted last month.

She said: “If there’s anything I can do to support Harry and his school I’m willing to help. I’m looking forward to my events and having fun with Harry, his family and friends. They are the next generation and I’m hoping the whole family can be involved.”