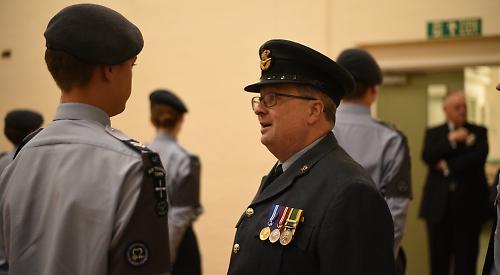 THE cadets underwent their annual formal inspection at their headquarters on Monday evening last week.

About 20 cadets met Squadron Leader Chris Breward, of the Thames Valley Wing, at the Drill Hall in Friday Street, who was accompanied by Henley Deputy Mayor David Eggleton.

The pair went through the three rows of cadets, looking at the badges on their sleeves, asking questions about their time with the squadron and offering advice about what they could do to progress.

Family and friends watched with pride from the back of the hall.

Following the initial parade, the cadets gave a series of workshops in first aid, communications and map reading.

Sqn Ldr Breward said: “This is my first visit to Henley and the squadron seems very dynamic.

“They are also achieving a lot with a small number of staff.

“As I was walking around the hall, I was asking them how long they had been in the cadets and what they were interested in doing in the future.

“They are a young and enthusiastic squad and a lot of them have only recently joined, which is good to see.”

Callum Honor, 16, from Caversham Heights, is the flight sergeant for the squadron and his parents Kirsten and James and grandparents Eric and Irene were in the audience.

Callum said: “This was my first inspection in charge so I was a bit nervous.

“The previous weekend we cleaned up the whole building to make sure it was right for the visit.

“We also have to make sure all the cadets are experienced enough to talk with the inspector.

“They ask them how long they have been in the cadets and what courses they are thinking of doing in the future.

“I first got into the cadets because I always wanted to be a pilot. All the courses can be taken locally, which makes it much easier.”

Flight lieuteant Tim Keating, who runs the squadron, said: “It shouldn’t be a night that makes us feel nervous but it does because the cadets are under the spotlight.

“It is a chance for them to showcase the squadron and what they have achieved. They should be proud of themselves.

“Being part of the cadets is all about personal development, citizenship and respect for others as well as yourself.

“We also try to let them know they should have fun.”

Mr Keating has been with the squadron since 2014 and first got involved when his son, Philip, became a cadet. He said: “We only have a small team at this squadron and we couldn’t run without them.

“It is a very small crew, but we have a very big heart.”

Councillor Eggleton said it was “a great honour” to be invited to the inspection.

He said: “The cadets looked very smart and I would urge them to keep up the good work.

“The town council has just given them a grant of £250 for their camping trips and we will continue to support their air training courses.”