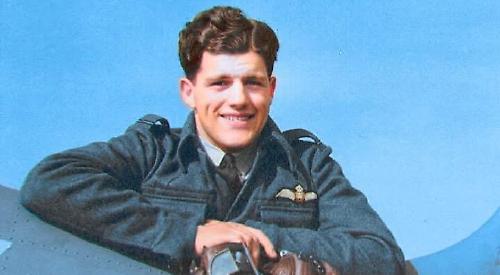 A SECOND World War Spitfire built in Henley and flown by a pilot who took part in the Great Escape is to be restored.

The plane, which was assembled at RAF Henley, was discovered on a mountainside in Norway in November, more than 70 years after it was shot down. It was largely intact.

The find was made by Spitfire historian and restorer Tony Hoskins near the city of Trondheim after months of research.

Mr Hoskins, an engineer who runs Spitfire AA810 Restoration, now plans to rebuild the aircraft so that it could be back in the air by early 2023.

Mr Hoskins, from Sussex, grew up in Didcot and used to visit the airfield at RAF Benson as a child. This early love of aviation led him into a career of plane restoration and when he heard that Spitfire AA810 was missing he set out to recover it.

The aircraft was one of more than 500 which were assembled near Henley during the conflict.

They were built at Vincent’s Garage in Reading before being moved to the top-secret Vickers hangar at RAF Henley, off Culham Lane, between Remenham and Wargrave.

The Spitfires were used for reconnaissance missions to photograph enemy troops, ships and bases and they were stripped of weapons and armour to accommodate extra fuel tanks.

As other factories were destroyed or put out of action, parts began to be transported to Henley at night. These were assembled and the plane test flown there before moving on to airfields like Benson.

Mr Hoskins said: “Henley was a very important site in aviation heritage. It’s still there but there is only one pillbox on the field to recognise what it was.”

The planes built in Henley had an expected lifespan of just 14 weeks as many were shot down by the Germans. They were usually destroyed upon hitting the ground.

Spitfire AA810 had taken off from Wick in Scotland shortly after 8am on March 5, 1942. After it crashed the pilot, Flight Lieutenant Alastair Gunn, was captured.

Mr Hoskins, who began his search in 2017, found there were no internet records of any Spitfire being found in Norway.

Then he came across a mention of parts having been discovered by members of a microlight club near the town of Surnadal in 2002.

He said: “The club went bust in 2015 and it was a bit of a struggle to talk to people in the area, which has very small, localised communities.

“I fired off an email to a nearby gun club, who forwarded it to a local councillor whose relative had been in the microlight club.

“He was a really helpful guy who said he found bits on a hill and the rest was still up there.

“The community was fantastic. They knew about the crash and that the pilot had come down into the town.

“There were people in their eighties and nineties who remembered the crash and we managed to piece it together.”

More parts of the plane were found in June and then the crash site was discovered.

Mr Hoskins flew out with a team of 10 people who excavated dozens of parts, which they had to carry for miles into Surnadal.

He said: “It took us about four days in total. We had people from the town, army guys and historians.

“We were having to take service roads up into the mountains, walk three or four miles and carry the whole aeroplane off the hill.”

The parts were gathered in the town hall with locals adding their own pieces that they had discovered over the years. One piece had been used to repair a motorbike.

Mr Hoskins said: “We had a lot of interest from the locals and when we laid the aeroplane out in the town hall about 70 people turned up. It was a good community project. There is now a memorial plaque on the wall and they are making the crash site a point of interest on their walking network.”

The remains of the Spitfire were returned to the UK to be reassembled along with parts from other Spitfires to make a working model.

Mr Hoskins said: “A reasonable amount of it will go again. Although the plane crashed from a height and was on fire, going through snow slowed it down. The peat bog below preserved it really well.

“It’s going to be a laborious task but as much as possible will go back into the aeroplane. The work officially started on March 4 and the first flight should be in 2023.”

Fl Lt Gunn, a 24-year-old Scotsman nicknamed Sandy, had flown the Spitfire 580 miles across the North Sea to Faettenfjord on the Norwegian coast.

His mission was to photograph the German battleship the Tirpitz, which was sheltering in the fjord.

He was intercepted by the Luftwaffe and shot down by two Messerschmitt 109 fighters.

The Germans were convinced that Britain had a secret airfield in Norway or Sweden as they didn’t believe that our planes were capable of completing the 1,200-mile round trip without refuelling.

They believed that if they captured the pilot they could uncover the location of the airfield.

Examination of the Spitfire has shown it was hit by about 200 machine gun bullets and 20 rounds of cannon fire but because it landed in deep snow on the mountain it remained in mostly one piece.

Flt Lt Gunn, who suffered burns including some on his face, managed to bail out.

He was found by locals who suggested he could escape over the mountains to Sweden but as he did not know how to ski and would have had to trek more than 100 miles across difficult terrain he decided to surrender.

Flt Lt Gunn was flown to Oslo and then to Frankfurt, where he was interrogated by German military intelligence for four weeks.

He was eventually sent to the Stalag Luft III prisoner of war camp in what is now Poland, where he took part in the war’s most famous breakout in March 1944.

The Great Escape, which inspired the 1963 film, involved 76 prisoners tunnelling more than 100m under the camp and fleeing through a forest. All but three were recaptured by the Germans.

The incident infuriated Adolf Hitler to the point that he ordered the execution of the majority of escapees.

Flt Lt Gunn, 24, was one of 50 RAF pilots, including 11 Spitfire fliers, to be shot by the Gestapo the following month. A national
commemoration of the Great Escape will be held at the Apollo Theatre in London on March 24 to mark the 75th anniversary.

It will be presented by historian Dan Snow and feature testimony from veterans of the escape and performances by the Britain’s Got Talent choir The D-Day Darlings.

There will also be a discussion which will be broadcast live to 400 cinemas around the country, followed by a screening of the film.

Mr Hoskins will be publishing a book about the plane and its history called Sandy’s Spitfire later this month.

His research revealed that Spitfire AA810 had a 22-week operational life and at least seven pilots, including Mervyn Anthony Jones, a jockey who won the 1940 Grand National, and motor racing driver Alfred Fane Peers Agabeg, both of whom were killed while on reconnaissance missions.

The excavation also revealed that the German army searched the aircraft for information, removing cameras containing film. Mr Hoskins tracked down Flt Lt Gunn’s only remaining relative, a nephew also called Alastair Gunn, who revealed a box of letters between the pilot and his parents as well as photographs, diaries and details of his execution.

Mr Hoskins also read part of a report of the assault on the plane by Heinz Knoke, part of the Luftwaffe crew which shot down the Spitfire and later wrote a book called I Flew for the Fuhrer.

Some other information came from the Frazer Nash Archives in Henley.

Mr Hoskins is now running a scheme for 14- to 18-year-olds to learn aircraft restoration named after Flt Lt Gunn.

He said: “Because he related his story to people in the camp, those people visited his parents after the war. The family have been really supportive of what we want to do and in return we have started a youth scheme for aviationists.

“That will hopefully be his legacy and get young people into the industry that he wanted to get in to.”