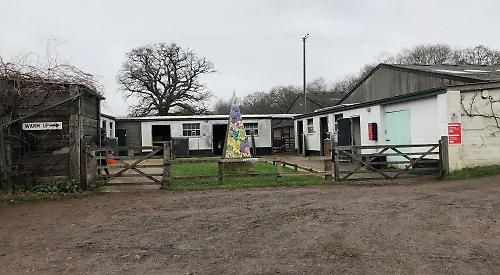 A HORSE rider suffered serious spinal injuries after coming off her horse during a showjumping competition.

Charlotte Snowden, from Checkendon, was competing at an indoor showjumping day at Checkendon Equestrian Centre on Saturday when the accident happened.

Ms Snowden, who is a professional photographer, cleared the final jump at speed but then came off her horse Prince and hit a wall.

She was taken to the John Radcliffe Hospital in Oxford by ambulance and had a nine-hour operation on her spine, which finished at 3am on Sunday.

Ms Snowden, who has two children, is still in intensive care and the full extent of her injuries is not yet known.

Her mother Lavinia Bolton said: “She was showjumping at the equestrian centre and she came off the last jump very fast, quite close to the wall. The pony went right and she went left.

“I’m still trying to find out exactly what happened. She’d cleared all the other jumps and if she’d stayed on the horse she would have actually won the competition.

“She has been riding since she was a little girl. I first taught her when she was about two. She’s a very experienced rider and this was just a freak accident.

“Prince was my granddaughter’s horse but she’s now more interested in other things as a teenager so Charlotte took over riding Prince.

“Charlotte can’t use her telephone at the moment but she has been awake since Sunday and doctors have been reading her the nice messages she has received. It’s a serious injury she’s had and she’ll need help for a little while but we don’t know the full extent of it yet.

“It’s so difficult with lockdown and covid because you’re only allowed one person to visit for one hour per day. She’s very close with her dad so he has been in a lot and her brother has been.”

Jennifer Greenbury, a director of the equestrian centre said: “This is very upsetting for all involved and we are very concerned for Charlotte.

“Checkendon Equestrian Centre has been running indoor jumping competitions for more than 10 years and this is the first hospitalisation we have had in all that time.

“Charlotte was riding her own horse in the showjumping competition with 60cm jumps. Multiple riders had already jumped the course, as indeed had Charlotte.

“All of us at Checkendon are really hoping Charlotte makes a full recovery.”