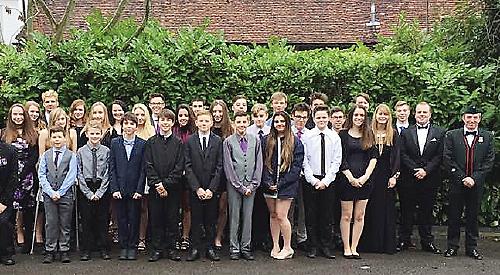 THE Henley Army Cadets finished last year with their annual celebration supper and awards ceremony at their base in Friday Street, Henley.

Several awards were presented to cadets for outstanding commitment and achievements in 2016.

2nd Lt Thomas Fearn, detachment commander, said: “Cpl Rechner’s award is one that all cadets strive to achieve, highlighting his extraordinary hard work and attitude that inspire the instructors and fellow cadets alike.”

The detachment is now looking forward to another successful year.

Cadet numbers are at their highest in the history of the detachment, with a view to expanding even further.

The Army Cadet Force is a national youth organisation sponsored and supported by the Ministry of Defence for 12- to 18-year-olds. It provides a challenging and varied syllabus based on military themes.

The Henley Army Cadets parade every Wednesday from 7pm to 9.30pm at the Drill Hall in Friday Street and are currently looking for new cadets and adult volunteers.

Feel free to come along and experience something new.