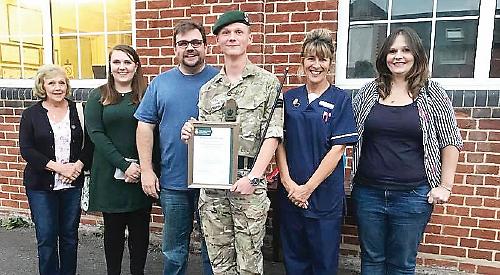 COMPANY Sergeant Major Matthew Strong, the most senior army cadet at the Henley detachment, was presented with a praiseworthy first aid certificate on September 5.

The certificate was awarded to recognise his actions in helping his father Robert after a serious accident which resulted in a serious foot injury and a number of nights in hospital.

The citation reads: “Matthew’s father fell from a height, seriously injuring his heel.

“Matthew applied immediate first aid and calmed his father Robert while waiting for the ambulance to arrive. Matthew accompanied Robert in the ambulance to the hospital where he spent a number of days.

“Matthew has been with us for five years during which he has gained his emergency first aid at work certificate, which he evidently used to assist his father.

“I’d like to thank Angie Porter for coming to present this award — it is important for our cadets to see some of our community’s role models.”

The army cadet force is actively accepting new cadets — if you are 12 years old and have just started in year 8 then come on down.

It is a national youth organisation for 12- to 18- year-olds, sponsored and supported by the Ministry of Defence. Army cadets provides a challenging and varied syllabus based on military themes.

The Henley Army Cadet Force parades at the Drill Hall in Friday Street every Wednesday from 7pm to 9.30pm and is looking for new cadets and adult volunteers.