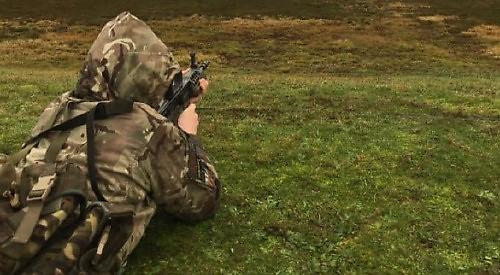 THE Henley Army Cadets have just returned from a shooting weekend in Bicester.

The detachment sent 42 cadets to the event where they undertook weapons handling tests, shooting, rifle drill and first aid.

The cadets were split into different groups. The senior group were on the range to undertake their 3Star shooting test. The distance was 200m and the cadets had targets that would pop up and down.

It rained for the whole of Saturday, which made it harder to see the target and harder for the cadets to concentrate. At the end of the day all the cadets passed their shoot. Sergeant Jamie Forehand achieved the standard of a first class shot and received a badge.

Detachment commander AUO Mel Haynes said: “I was extremely pleased that all the cadets passed. The shoot is hard and the weather was horrendous.”

Cdt Sgt Forehand said: “The shoot was good fun and I enjoyed it. The targets would go up and down, which made it harder than the usual shoots. I’m so pleased to have got my first class shot.”

It provides a challenging and varied syllabus based on military themes.

The Henley Army Cadet Force parades at the Drill Hall in Friday Street every Wednesday from 7pm to 9.30pm. We are currently looking for new cadets and adult volunteers, so feel free to come along and experience something new.