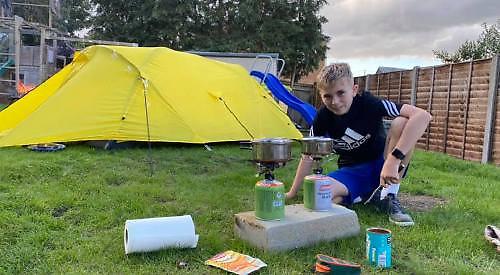 CADETS from the Henley Detachment, Oxfordshire Army Cadet Force, were involved in a camp-out this summer.

Cadets had a weekend to set up a camp and cook dinner in their own gardens.

They then sent in photographs to be in with a chance of winning vouchers for cadet equipment.

The force offers a variety of challenging and varied training to the cadets.

Expedition is just one of 10 subjects that the cadets can get involved in.

Expedition develops their resilience and independence, among other skills. The Henley cadets produced a variety of dishes such as homemade pepperoni pizza, tofu curry and rice, barbecued sausages, omelette, smores (melted marshmallow in chocolate biscuit) and many more.

Some cadets spent the night in tents as well as shelters made from waterproof sheeting, blankets, rope and even trampolines.

Henley detachment commander Mel Haynes said: “I would like to congratulate all the cadets for taking the time to showcase their creative meals and campsites.

“I would also like to commend the cadets for their continuous efforts with the virtual training. I look forward to when we return in the near future.”

To join the cadets or to become an adult volunteer, email AUO Mel Haynes at 3360haynes@armymail.
mod.uk