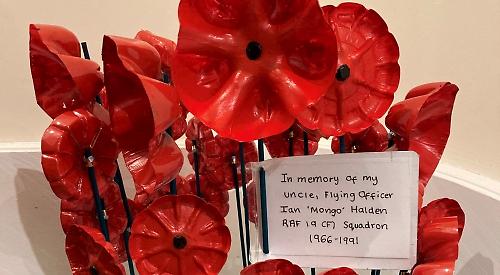 MEMBERS of the Henley detachment, Oxfordshire Army Cadet Force, have been busy making poppies for a remembrance display at their county headquarters in Bicester.

The cadets received a virtual tutorial on how to make a garden poppy from county training officer Major Paul Rodwell, using the bottom of a plastic drink bottle, red spray paint, a black marker pen and a green garden cane. The cadets have also been researching their family trees and local heroes who served in the armed forces and presented their findings to their fellow cadets via a virtual parade night on Remembrance Day on Wednesday.

Along with their research, the cadets entered a detachment competition. They had to upload a photo of themselves in their smartly ironed uniforms and polished boots during their two-minute silence on Sunday.

Even though we were unable to parade in person, we will remember them. The Army Cadet Force is a national youth organisation for 12- to 18-year- olds, sponsored and supported by the Ministry of Defence.

Normally, the Henley Army Cadet Force parades at the Drill Hall in Friday Street every Wednesday from 7pm to 9.30pm. Once we re-open for normal training, we would love for new cadets and adult volunteers to visit us and experience something new.