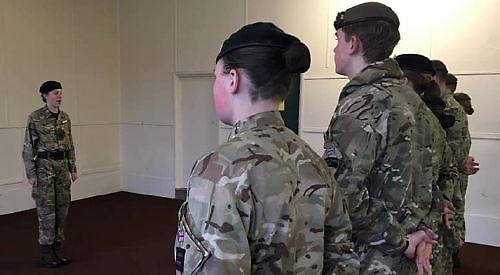 CADETS from the Henley Detachment, Oxfordshire Army Cadet Force, were busy gaining qualifications on a variety of virtual courses over half-term.

The army cadets offers a variety of progressive training along with the opportunity to gain further qualifications.

They covered a variety of units, such as employment skills, career planning, teamwork and communication skill. This qualification also earns the cadets UCAS points.

As well as formal qualifications that can be used outside of cadets, there are internal courses which develop their personal skills.

These include the senior cadet instructors cadre, which is a five-day course where senior cadets learn and develop teaching techniques as well as their army cadets knowledge. They then pass this on to their junior cadets.

The Henley detachment had three cadets that successfully passed their SCIC.

As a part of their final test they had to present three lessons via Zoom to the other candidates.

This is designed for cadets to have an opportunity to view, experience and understand STEM in an armed forces context and encourage them to continue these subjects at GCSE, A-level and beyond.

Charlie will receive a badge to wear on his cadet uniform and a certificate of graduation as an industrial cadet silver level.

Henley detachment commander, Adult Under Officer Mel Haynes, said: “I would like to congratulate all the Henley cadets who have continued to develop their skills and qualifications virtually.

“They have all worked hard and have shown commitment. I am very impressed that the cadets spent their half-term on these courses while balancing it with their college work or part-time jobs.

The Army Cadet Force is a national youth organisation for 12- to 18-year- olds, sponsored and supported by the Ministry of Defence.