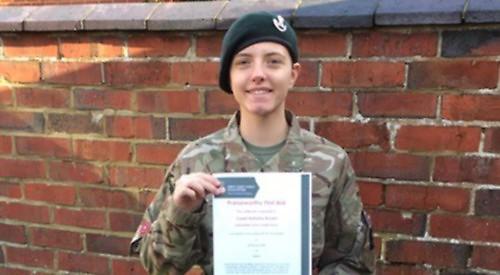 HENLEY Army Cadet Lance Corporal Natasha Bryant has received an award for going to the aid of an epileptic man.

The 15-year-old was travelling home from school on a bus with a friend when a fellow passenger began to have a seizure.

Natasha sprung into action. She moved other passengers out of the way, made the man comfortable and alerted the bus driver.

While the driver called 999, Natasha comforted the man. When he came around, he informed them that he had epilepsy and did not require further medical assistance.

As the bus continued its journey, Natasha kepy him company until he had reached his stop.

Now she has been awarded the Praiseworthy First Aid Certificate for her actions.

The certificate is the highest level of recognition for first aid in the Army Cadet Force.

Maj Thrussell said: “This award is very rare. It’s an honour to present it.

“LCpl Bryant is a cadet that has stepped up and out from the crowd. A massive congratulations on receiving this award.”

Natasha has been a part of the cadets for more than two years and was recently
promoted.

The cadets undertake a variety of training, including first aid. They have opportunities to gain qualifications and skills which are transferable in day-to-day life.