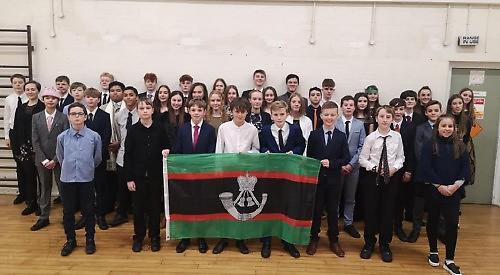 THE Henley Detachment, Oxfordshire Army Cadet Force, celebrated the end of 2020 with its annual awards ceremony via Zoom.

Six awards were presented in the form of shields, plaques and cups.

Best recruit was awarded to Cdt Millie Martin, who is new to the cadets but has engaged and developed through the syllabus.

Best cadet was awarded to LCpl Gwiazda, who has consistently impressed and achieved during the year.

Best non-commissioned officer was awarded to CSgt Jamie Forehand, who has displayed great leadership skills in the field and virtually.

He recently passed his senior cadet instructor cadre, which has helped him develop his instructional skills and helped the junior cadets.

Earlier this year, Jamie gave a radio interview about his research of the local regiment, the 4th Ox & Bucks Light Infantry, and their important involvement in the Battle of Cassel.

Earlier in the year, seven Henley cadets went on a shooting weekend and got to grips with the cadet target rifle.

Jamie achieved great scores and proved to be the best shot in the detachement.

Best drill and turnout was awarded to LCpl Natasha Bryant for her high standard of dress, good attendance record and embracing the cadet force values.

The Fearn Shield for the cadet who supports the detachment commander the most during the year was awarded to CSM Tallulah Scott for her consistent help and support in all aspects of cadet training.

2Lt Mel Haynes, detachment commander, said: “This has been a hard year but the cadets have continued to develop and flourish.

“There are only six detachment awards but all cadets should be proud of what they have achieved within the cadet force and the values they hold.

“I wish everyone a Merry Christmas and look forward to returning to face-to-face training in the new year.”

The Army Cadet Force is a national youth organisation for 12- to 18-year olds, sponsored and supported by the Ministry of Defence. Normally, the Henley Army Cadet Force parades at the Drill Hall in Friday Street every Wednesday from 7pm to 9.30pm.