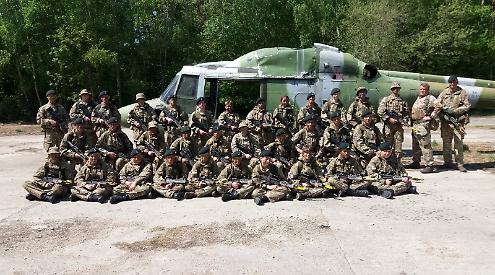 HENLEY Army Cadets were deployed at the Bramley Military Training Area in Hampshire on a fieldcraft weekend.

The weekend focused on the cadets’ skills in the field, such as campcraft and cooking in the field, while having fun and being in a different environment.

Each group had the opportunity to further their training, ready for their annual camp in August.

The basic training cadets were introduced to overnight training in the field and developed skills such as building a shelter (BASHA), cooking in the field with 24-hour ration packs and general teamwork and communication that they will use for the rest of their time in the Army Cadet Force.

One basic training cadet said: “It was really fun doing fieldcraft. We do it at detachment but it was cool staying out overnight.

“The part that I enjoyed most was when we were setting up the BASHAs together. It was fun learning about the different types of ways you can do them.”

The one-star training cadets were introduced to weapons training in the field. They were given responsibility for their rifles for the weekend and were shown how to clean and care for them. They also took part in their first blank firing exercise.

A one-star training cadet said: “I really enjoyed the weekend. It was cool using the rifles and being with my friends at the training area.

“The food was pretty good and it was surprisingly comfy sleeping under the BASHAs.”

The senior cadets spent the weekend revising their fieldcraft knowledge and working together in intense situations to overcome enemy threat.

One senior cadet said: “My favourite part of the weekend was the section attacks we performed. This is because we were all able to shoot lots of blank rounds, which is always more exciting. It really gets your heart racing, in a good way.”

The Army Cadet Force is a national youth organisation for 12- to 18-year olds, sponsored and supported by the Ministry of Defence, which provides a challenging and varied syllabus based on military themes.

The Henley Army Cadet Force parades at the Drill Hall in Friday Street every Wednesday from 7pm to 9.30pm. We are currently looking for new cadets and adult volunteers, so feel free to come along and experience something new.