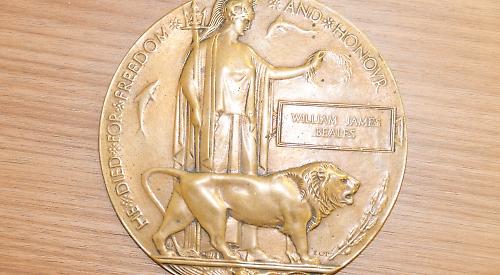 PRIVATE William James Beales, from Henley, was killed in action in the Great War exactly 100 years ago on Sunday.

He was serving on the front line with the Royal Army Corps in France when he was seriously wounded. He was taken to hospital in Rouen where he died from his injuries. He was just 24.

Pte Beales was married to Gertrude Lily Beales and lived in Chiswick before moving to Henley, first to Greys Hill and then Mount View. His grandson Trevor, who lives in St Anne’s Close, only discovered all this after the death two years ago of his brother Eric who kept all the information at his home in Northfield End.

Trevor, 71, says: “I found all the information about my grandfather when I was clearing my brother’s house.

“There it all was — marriage certificate, official documents — at the bottom of a wardrobe in my brother’s bedroom.”

Trevor and his wife Susan boxed up all the paperwork and took it home to sort it. It was only when he decided to have a proper look through it all that he discovered so much about his grandfather.

“I was gobsmacked,” he says. “I never knew his real name. I knew his surname but I didn’t know his first name. It was William, the same as my dad.”

He also found a “Dead Man’s Penny”, a memorial plaque so called as it was made of bronze and looked similar to the smaller penny coin.

The plaque was issued to the next of kin of all British Empire and service personnel who were killed as a result of war. Trevor also found Pte Beales’s army dog tags and a tunic button that was attached to a little key, which would probably have been to his tobacco pouch.

He says: “I never knew of any of it. My mum never mentioned it, nor my brother. It gets put in drawers and cupboards and is forgotten about.

“I will never get rid of it. My son will have it and I have two great grandchildren so it will pass down. In the meantime, I will keep it like my brother did.”