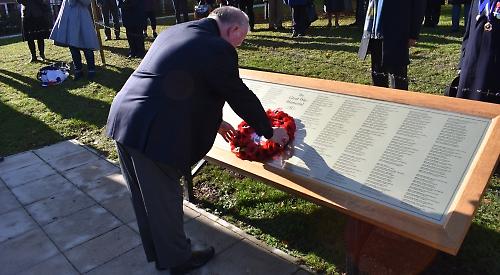 A MEMORIAL plaque featuring the names of more than 300 soldiers from the Henley area who died during the First World War has been installed at Townlands Memorial Hospital.

The Lord Lieutenant of Oxfordshire Tim Stevenson officially unveiled the plaque at a private ceremony at the hospital off York Road on Friday.

The memorial was the brainchild of Mike Willoughby, an amateur historian from Woodcote, and his wife Lesley, who founded the Lest We Forget project to honour the town’s “forgotten” servicemen.

Known as the Great War Memorial, it features the names of all 312 soldiers from Henley and the surrounding villages who lost their lives in the conflict with the Lest We Forget logo in the centre. It includes their regiment, the date and cause of death and their age.

It includes 13 names which the couple discovered after three new memorials were installed at Henley town hall and Holy Trinity and St Mary’s Churches in the early stages of the project.

The plaque, which was paid for and installed by Townlands developer Amber Solutions for Care and NHS Property Services, has a bronze-coloured base with a wooden frame.

More than 40 people were invited to the ceremony, including Henley MP John Howell, former town clerk Mike Kennedy and members of Henley Town Council and the Henley and Peppard branch of the Royal British Legion.

They were welcomed by Rev Duncan Carter, rector of Holy Trinity Church in Church Street, who led the guests in prayers. He said: “Welcome to what, for us, is an unexpected but delightful culmination of the Lest We Forget campaign.

“It’s wonderful to say we now know the stories of these people who are named on the memorial.”

The Lord Lieutenant, who officially opened the £10million hospital in March last year, said: “It was four years ago that Mike presented me with a wonderful copy of his book Bringing Them Home, a record of the 310 individuals killed in the Great War. Mike’s work, and that of the team who supported him in researching this remarkable book, is part of a wave of effort going on around Oxfordshire and the country to bring back to the forefront of our memories those who died in the deadliest conflict humankind has ever seen.

“It matters a great deal that many people around the country have worked very hard over the course of the last four years and more to bring back to the surface the nature of that terrible conflict.

“This memorial involves so many people across all Henley communities.”

Mr Stevenson then removed a Lest We Forget cover and Union flag from the memorial before a visibly emotional Mr Willoughby laid a wreath on it.

Trumpeter Marilyn Elliott played the Last Post, while Fl Sgt Adam Tobin, an air cadet from Cowley Squadron, read the Ode of Remembrance from Laurence Binyon’s poem For the Fallen.

After the plaque was unveiled, guests were invited to refreshments in the Maurice Tate Room at the hospital.

A map showing the locations of the homes of all the fallen soldiers was on display in a building near the plaque and a recording of their names being read aloud was played.

Mr Willougby said: “Everyone involved has been brilliant and NHS Property Services and Amber gave us the opportunity to have this memorial.” Townlands is already home to the First World War memorial from the old Henley War Memorial Hospital, which was opened in 1923 and closed in 1983 and was then demolished.

Mr Howell added: “I think these memorials are incredibly important, not just for this year but to continually remember the vast number of people who gave their lives. It’s very important to retain that memory.”

John Green, chairman of the Henley and Peppard branch of the Royal British Legion, said: “It is a very fitting tribute and a fine finish to the work the Lest We Forget project has been engaged in for the last four years.

“To have a prominent memorial on the site of Townlands Memorial Hospital is particularly appropriate. We will not forget, we will remember them and so, hopefully, will future generations.”

Tony Griffiths, head of projects at NHS Property Services, said: “It has been a great pleasure for us to have helped the Henley World War One Remembrance Association successfully achieve their aim of having the memorial plaque in place in time for the 100th anniversary commemorations.

“We hope it will be seen and appreciated by users of Townlands Memorial Hospital for many years to come.”