Award-winning Henley artist is opening her studio to the public 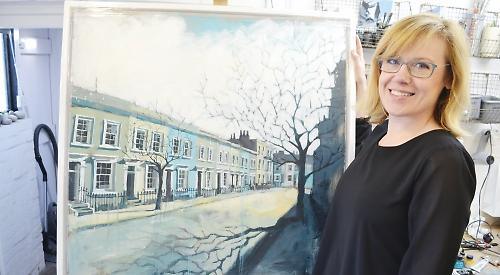 THE award-winning Henley painter Camilla Dowse is opening her Singers Lane studio to the public next weekend.

The “Winter Open Studio” event, which runs from noon to 6pm on Saturday and Sunday, will feature small paintings and drawings, including rarely seen life and still-life paintings that aren’t available from galleries.

There will also be some new paintings of Henley itself on show, with Christmas drinks and nibbles available in the courtyard.

“Artists are on a constant journey of exploration,” says Camilla, “and it’s taken me many years to discover an appropriate marriage of subject matter and materials.

“I thought it might make for an interesting open studio event to share the journey I’m on and to give visitors the opportunity to learn about my process and to see study paintings alongside examples of new work.”

Since being named Artist of the Year by Artists & Illustrators magazine in 2014, Camilla’s urban landscapes have continued to capture the imagination of galleries and curators throughout the UK — with 2017 proving to be another busy year.

As well as being invited to exhibit at the Affordable Art Fair in London and the Edinburgh Art Fair, Camilla was shortlisted for the Sunday Times Watercolour Competition for the second time.

She was also chosen to exhibit at the ING Discerning Eye exhibition at the Mall Galleries in London, where this year paintings were selected by the artist Anne Magill and the actress and collector Miranda Richardson.

With 465 works by 237 artists on show, competition was fierce, but earlier this week Camilla’s painting Sussex Place W2 was announced as the winner of the Chairman’s Purchase Prize — one of the top three awards at the exhibition.

“Competitions are a great way to meet other artists and to raise one’s profile,” says Camilla, “but by far the most exciting thing to happen this year was to be asked by Laura Reineke to donate a painting for auction to help raise money for the Henley Music School. It’s a privilege to support a local charity that encourages young people to get involved in the arts.”

Earlier this month, Camilla’s Singers Lane neighbour Genevieve French, was featured in the Henley Standard after the designer Paul Smith produced a range of signed limited-edition prints of her work.

Genevieve will also be opening her studio for the weekend, where original paintings will be on show alongside the prints.

Singers Lane Artist Studios can be found at the top end of Singers Lane near Vicarage Road.

The ING Discerning Eye exhibition runs until Sunday (November 26). For more information, including full details of the exhibits visit www.discerningeye.org