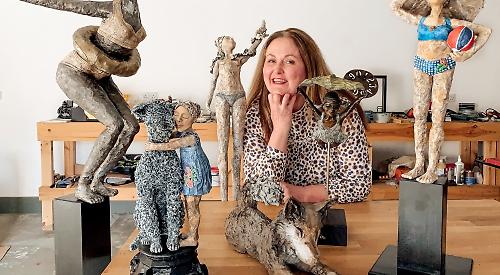 A SCULPTOR from Bix has been unveiled as one of the contestants taking part in the second series of a BBC reality TV show called Home Is Where the Art Is.

Dawn Conn, who has been a professional artist for the past nine years, watched the first series when it was broadcast last year but never suspected that she would be asked to take part herself.

“Not in my wildest dreams,” she laughs. “The first email I got was in August last year from a BBC researcher saying ‘We’re casting for the show and we really think your work would be ideal.’

“I looked at it and I went you are joking, someone’s having a laugh — I really discarded it. But then I thought, oh, that’s a compliment, this is nice — to be found — and how did they find me?”

Originally from New Zealand, Dawn and her husband moved to Bix last year from Cookham.

The 52-year-old soon forged links with the Bix Six Artists group and took part in the group’s Christmas show at the village hall in late November.

Dawn specialises in outdoor sculptures but says that her smaller, hand-painted pieces are also suitable for indoors.

Women in vintage bathing costumes are one of her signature themes — and it was this that attracted the BBC.

Dawn says: “I spoke to the casting director and he said he was just googling words like ‘swimming’ and ‘sculpture’, those types of things. It was a very random sort of trying to get to something.”

Once she agreed to take part, filming took place from the start of September to the start of November last year.

The trio must each try to work out the buyer’s style and taste during a Through the Keyhole-style snoop around their home.

They are then given a brief prepared by the homeowner. Next, when the two sides finally meet, the artists are asked to present their proposals before one of the three is knocked out.

The remaining two contestants are then given the chance to make their artworks to a specified budget and install them in the buyer’s home. But in the end, only one winner can be chosen.

For the opening section of Dawn’s episode, she and her two fellow contestants were each filmed looking around a house in Whitstable, on the Kent coast.

“We ended up going to this most glorious house,” says Dawn. “Its position by the ocean and the view was unbelievable.

“What you’re trying to do for the viewers is paint a picture of what these people are like — what sort of age, what sort profession, what sort of likes, dislikes, are they a couple or someone on their own.

“The entertainment part is what the artists’ assumptions are versus what the people are really like. So that was part of the challenge.”

Having been given a budget of £750, Dawn next set to work on her proposal. “I made a mood board,” she said. “Then I made 3D props and stuck them all on there. I took themes that I picked from the house and took photographs of where I thought the piece could go.”

Dawn’s brief was: “Just smell that sea air. We love Whitstable, it’s our dream location. We want something fabulous to capture our happy life here with our furry friends. Waking every day and taking in the glorious views… waves, sand and sun bring a seaside fun. Likes: contrast, mystery, the sea — did we mention that? Dislikes: blobs and splashes, futuristic things, unmade beds.”

Dawn confesses to having been nervous at times while making the programme but is happy she did it, saying: “If I look at it in reflection to the whole experience, it gave me a lot of confidence and inspiration. So it was really positive.”

Featuring a total of 15 daytime episodes, each 45 minutes in length, Home Is Where the Art Is is due to run on Mondays to Fridays for three weeks this spring and will also be available on BBC iPlayer.

Broadcast dates are still to be confirmed but an announcement is expected shortly. For more information, visit the programme’s homepage at www.bbc.co.uk/
programmes/m0004jcr