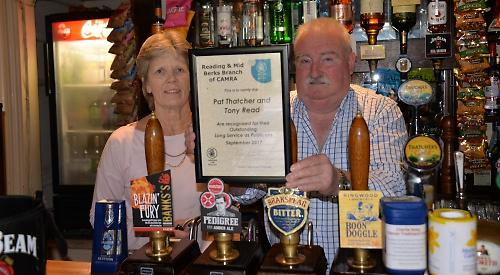 THE tenants at the Flower Pot pub in Aston have won an award from the Campaign for Real Ale for services to the industry.

Landlord Tony Read and his partner Pat Thatcher were honoured for their outstanding service as publicans at a presentation evening last week.

The couple marked 25 years at the Brakspear pub in February and are the company’s longest serving tenants.

They took over in 1992 when they learned the landlord was leaving and have been there ever since.

Mr Read, 68, was presented with a framed certificate at the Bell and Bottle pub in Shinfield last Wednesday. He said: “We were really pleased to have it and be recognised for our long term commitment to the industry. We have to thank our regulars and punters for helping to keep us going.”

The pub was built in 1895, has a large garden and is a popular stopping point for walkers and cyclists, particularly in the summer.

It includes Britain’s largest private collection of cased fish with more than 100 examples adorning the walls, including a pike that had weighed more than 50lb when it was alive.

Films and TV shows, including Miss Marple, Pie in the Sky and The Sculptress, have all been filmed at the pub over the years.

Last year, the couple hosted a fireworks display which raised £800 that they used to install a defibrillator at the pub.