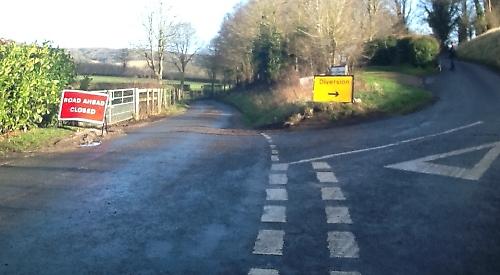 A PUBLICAN is seeking compensation after his business was cut off for two months because of misplaced road signs.

Tony Read, who runs the Flower Pot in Aston with his partner Pat Thatcher, says his trade has dropped by at least 50 per cent since January 1 after Thames Water shut Aston Lane at the junction with the A4130 for water main replacement work with “road closed” signs in place.

But the pub also appeared to be cut off from the other direction after a “road ahead closed” sign was placed in Remenham Lane at the junction with Remenham Church Lane, although these have since been removed.

Mr Read, who has run the Brakspear pub for 26 years, said: “We have lost half our trade. Normally in winter we’ll do at least 90 lunches on a Sunday but we’re doing 45 or 30 at the moment.

“Customers are not going to go two miles out of their way and even the locals are complaining. There’s no one here in the evenings.”

Two small signs advertising the Flower Pot have been placed at the top of Aston Lane but Mr Read said this wasn’t enough.

“We’re going to be asking Thames Water for compensation. You don’t mind one road being shut off but they closed both roads.” Mrs Thatcher said that on one evening not a single customer visited the pub.

“It’s a nightmare,” she said. “You never know what to be ordering food-wise. We should be doing 30 or 40 meals a day. If we do four we’ll be laughing.”

Pub regular Jim Sneddon, from Wargrave, said: “I pop here for lunch sometimes. The only reason I still come is because I actually ignore the ‘road closed’ signs and go around them.

“It’s a total inconvenience — it takes you miles out of the way but I walk my dog down here and it’s only because I know the area that I knew the sign was ridiculous.”

A spokesman for Thames Water said: “We will assess all compensation claims for loss of business during any essential works on our 20,000-mile water pipe network.”