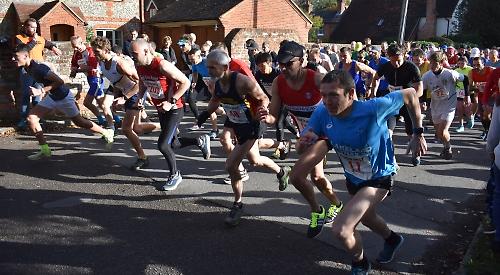 MORE than 300 people, including a school headteacher and her parish councillor husband, took part in the 11th annual Frieth Hilly on Sunday where runners competed over 5km and 10km distances.

The run started and ended at Frieth Primary School and the course travelled through woodland and meadows in the area.

The event began with a bespoke blessing by Hambleden Valley rector Rev Sue Morton, which mentioned some of the village’s landmarks along the running route, as entrants gathered in the school playground to stretch.

The runners were then set off at 10am, with the 10km competitors starting slightly further up the road to the 5km runners. Many residents along the route came out of their houses to watch the runners, while spectators also gathered on the roadside to take photos and cheer.

Despite heavy rainfall the previous day, it remained sunny and cool for the race, with finishers gathering in the playground again afterwards for refreshments.

Each runner was given a medal for completing the race, while family and friends crowded around the finish line to cheer on the runners as they came in.

The 10km race was won by marathon runner Ben Livesey in 35 minutes and six seconds, just six seconds off the course record.

RAF team runner Livesey, who finished 15th overall in the 2014 London Marathon and regularly takes part in the Henley parkrun, was more than two minutes ahead of runner-up Jon Worcester, from Windsor, who was taking part for the first time. The first female runner to cross the line was Harriet Chettleburgh in 44 minutes and 53 seconds.

The 5km race was won by 14-year-old Jacob Sanderson, who lives in the village, in a record time.

Sanderson, who goes to John Hampden Grammar School in High Wycombe and runs for Wycombe Phoenix Harriers, finished in 18 minutes and 22 seconds, four seconds faster than the previous record.

He said: “I’ve done the race before but never won it. I do cross-country as well as track.

“I thought it was a good course, going down through the woods, but it was quite slippery today.

He was followed by friend James Palmer, 14, in 19 minutes and 15 seconds, while the first girl to cross the line was Abbie Jones in 21 minutes and six seconds. Primary school headteacher Jo Reid ran for the second year in a row, finishing the 5km race in 44 minutes and 16 seconds.

Reid, who lives in Watlington, was just over two minutes slower than her time last year, which she blamed on antibiotics she has been taking for a neck injury.

She took part this year alongside her husband Matt, who is the chairman of Watlington Parish Council, and the couple crossed the line together to cheers.

Reid has been in charge of the school, whose parent-teacher association organises the event, since 2013 and was cheered on during the race by the school choir.

She said: “It was hard work but it’s really good fun and all the other runners, as they came round, were saying ‘well done’.

“It was a bit harder this year but it was a lovely atmosphere. The choir gave me a massive cheer and an extra-loud sing.

“It’s the first time Matt has run it and he kept me company.” The event is expected to have raised about £9,000 which will go towards sports equipment and an IT suite at the school.

Race director Will Richards said: “Numbers were a little down on previous years but we went a bit earlier this year and it’s a competitive time with lots of other races also taking place.

“Jo Reid came back again after saying she wouldn’t run again, which was great news.

“We always try and sell ourselves on the atmosphere. We have stunning countryside but so does every race in our neck of the woods. We always have a very positive family vibe. We were blessed with the weather this year, which always helps, but even when it chucks down with rain we manage to maintain the atmosphere.

“The residents really do buy into it, a lot of the villagers are marshals and they get involved as much as possible.”