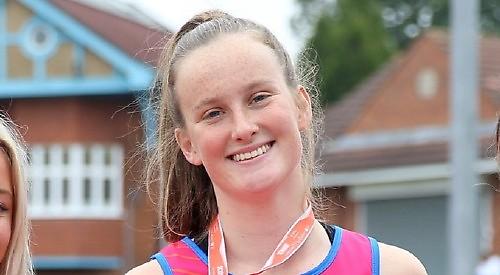 Claudia Kerry-Roger, 16, took the honours with her throw of 38.11m in the two-day event held at Loughborough.

The top eight UK athletes under 17 were invited to compete in each track and field discipline as part of Loughborough’s Elite Athlete Programme, as athletes are able to experience the world class facilities.

Unfortunately, due to covid restriction, spectators were restricted this year with the event being broadcast live on YouTube.

The youngster owes her success to the lifestyle restrictions during lockdown.

She had been a passionate netball player for eight years, rising through the ranks of county and regional netball to play for the U15 Super League Academy at Saracens Mavericks. However, when lockdown brought an end to the netball season Kerry-Roger decided to switch her attention to athletics where she is coached by international throws coach Neville Thompson of Shaftesbury Barnet Harriers AC, at the Saracens StoneX Stadium in London.

Kerry-Roger said: “Lockdown training worked brilliantly for me. Discus is a very technical event and my coach was able to really focus on my movement using FaceTime and video analysis. It actually worked better than regular training, because I didn’t waste time travelling to London and I could fit the training around my GCSE revision.”

Kelly-Roger was awarded a “Talented Athlete Bursary” by Active in the Community in 2021. She used her sports bursary to build lockdown training facilities in her garden using rubber tiles and cement to create a discus circle.

With no access to gym equipment she improvised using all kinds of gardening equipment including old wheels, brooms and sand bags for strength and conditioning.

The teenager also improved her cardiovascular strength with daily runs and ergo sessions. By the end of lockdown she was starting to achieve good ergo times for a junior rower. The physical attributes for rowing and discus athletes are similar as both require good height, wide arm span and coordination skills.

After completing her GCSEs Kelly-Roger decided to use the long summer break to learn to row and joined Olympic medallist Peter Chamber’s squad, at Marlow Rowing Club.

She added: “I became hooked on rowing in a very short space of time — I love being on the water and the physically exhausting training sessions are weirdly addictive.”

After some fast track coaching from Chambers, Kelly-Roger was selected for one of Marlow’s J16 girls quads at the National Schools Regatta this year where she secured a silver medal in the Kitchen Cup.

Kelly-Roger is currently studying for A-levels in biology, psychology and PE at Sir William Borlase Grammar School. She added: “I am so excited by the opportunities I have been given in athletics and rowing and hope they might lead to an elite athlete or rowing scholarship at an American university.”