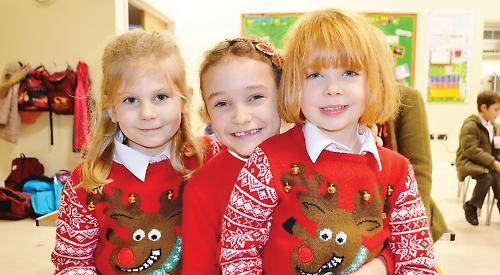 pupils and parents at Badgemore Primary School in Henley took part in an end-of-term carol service. A choir of 10 children led the 30-minute concert, which included O Little Town of Bethlehem, Silent Night and The First Noel and ended with a sing-a-long rendition of We Wish You A Merry Christmas. The event, called Carols Around The Tree, took place in the main hall where a Christmas tree had been set up and decorated. Parent Richie Fraser played the piano while pupil Audrey Smith sang the first verse of Away In A Manger solo, which earned her a round of applause. Between carols, the children took it in turns to give readings from the Bible that told the story of Jesus’ birth. A group of parents was serving mulled wine, teas and coffee, cakes and mince pies. Headteacher Jackie Steele said: “This is a lovely annual tradition and we’ve really enjoyed it once again. It’s a nice, informal way of getting together and ending the term in the Christmas spirit.” Pictured: top, left to right Isla Tate, Viola Bruun-Andersen and Zara Tate; above left, Catherine Mattingly, of King James Way, Henley, with daughters Maggie, seven, left and Robyn, five; above right, Audrey Smith singing her solo