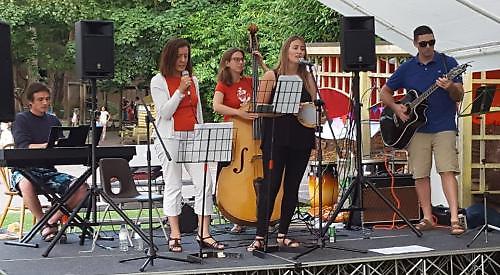 HUNDREDS of children sang, danced and played games at a festival held at a Henley school.

Badgefest, which took place at Badgemore Primary School in Hop Gardens, was organised to celebrate the talents of its children, staff and families.

It was run by staff and members of the Friends of Badgemore School and started during the school day with displays of artwork and showcases of dancing, music and gymnastics by different classes, which parents were invited to come and watch.

After school, families set up tents on the school field and had picnics before staging a show called Badgemore’s Got Talent featuring comedians, musicians and even a father demonstrating fire-breathing and how to ride a unicycle. There was also live music and a tug of war competition.

Visitors had a snack of roasted marshmallows around a fire before 68 people spent the night camping out on the field. The next day the school hosted a summer fair with stalls, music from local bands, a barbecue and face-painting.

Despite the wet weather, hundreds of people attended the fair, taking shelter in the marquee or under umbrellas. They included pupils, parents and staff as well as town councillor Dave Eggleton, who was dressed as a cavalier.

Some of the attractions could not take place so the school arranged for a “splash the teacher” game to be held at the school three days later. The festival marked the end of headteacher Jacky Steele’s time at the school as she is leaving to join a school in Reading.

Organiser Bev Calvert, a member of the Friends group, said: “Jacky had the idea to do a summer fair a couple of years ago but we never got round to organising it because it was so much work. Because she is leaving this year we decided to go for it and it was fantastic. A lot of people said we were taking on too much but we were determined to make it work.

“The rain didn’t dampen our spirits, just our clothes. We definitely want to hold it again next year and will invite Jacky back.”

Ms Steele said: “The fair was better than I could have ever imagined. It takes some organising and huge thanks go to the Friends who took the mantle and just got on with it.

“A huge thanks also to the local bands that came and played.

“The children’s showcases were spectacular. They were so brave and confident and I’m so proud of them.

“I’m definitely going out on a high — it has been wonderful.”