Pupils learn how to stay safe when using the internet 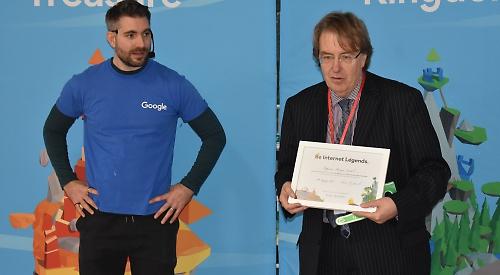 PUPILS at Badgemore Primary School in Henley learned about internet safety at a special assembly on Friday.

More than 50 children from year 3 to year 6 saw a presentation by social enterprise Parent Zone, which works to educate children about the digital world, with the support of Google.

Daniel Robert Leigh and Jennie Delaney delivered the presentation and warned the children that anything they shared online had the potential to go viral.

They said 36 million people in the UK use the internet every day, which was the equivalent to Wembley Stadium at capacity 400 times.

The children were encouraged to shout “remember, always think before you share” so they would not forget.

The presenters also talked about fake news. Mr Leigh said: “If something seems too good to be true, it probably is.”

There was also a warning about phishing, where criminals attempt to steal personal information such as debit card numbers or an email address. People are often targeted through pop-ups that ask for information by interrupting browsing online.

The children were encouraged to shout “check it’s for real” and then learned about what makes a password strong. To ensure these are effective, they should be at least eight characters and comprise numbers as well as lower and upper case letters.

The presenters also said it was important to be kind online and repeat messages out loud before sending them to ensure they could not be misunderstood.

The children were told about a range of scenarios they could encounter on the internet and asked how they would respond with an emoji.

Mr Leigh held up two emojis depicting different states, such as happy or sad, and the children chose the one that was most appropriate for each scenario.

These included a friend sharing an image of a red panda online, which the children chose to respond to with a love emoji.

At the end of the presentation they graduated as “internet legends” following a pledge where they said: “I promise to be sharp and think before I share, to be alert and check it’s for real, to stay secure and protect myself, to be kind and respect my fellow legends, to be brave and when in doubt discuss. Sharp, alert, secure, kind, brave.”

Henley MP John Howell attended the presentation and presented the school with a certificate.

He said: “I think this is a very excellent presentation to children about what they can do with the internet.

“They have to learn how to use it properly, both to keep themselves safe and to learn how to be kind to each other and realise there’s a human being at the other end of the internet.”

Headteacher Tim Hoskins said: “The children and adults have learnt so much about keeping safe online.

“The technology in the world today can really benefit children’s learning and yet, at times, it can be damaging.

“As a teacher and parent, I’ve found that online activities move so quickly that it is now more necessary than ever that children know how to protect themselves.”