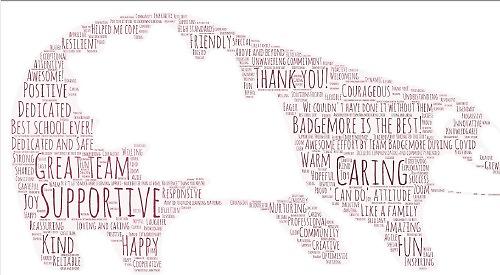 AN artwork was unveiled at Badgemore Primary School in Henley to celebrate pupils and staff.

It is an image of the school’s badger logo made from words featured in about 30 responses to a parents’ questionnaire.

The art, which was printed and stuck on to the wall inside the building’s main entrance, was unveiled by headteacher Tim Hoskins on Tuesday.

About 20 members of staff and governors applauded after a screen was removed to display the piece.

It features messages such as “Badgemore is the best!” and “Awesome effort by team Badgemore during covid”.

It had been put together by the governors, including Bill Feeney, of Queen Street, whose two daughters Daisy, 15, and Poppy, 11, both attended the primary.

The questionnaire asked parents to explain in a few words how they felt about the team at Badgemore and its attitude during the coronavirus lockdown. It also asked them to share something positive, funny or touching they noticed about the school or their children.

The event had been organised to thank staff for their hard work and mark the end of term.

Ian Massey, who chairs the governors, described the work as “very moving” while Julia James, who has taught at the school for about 15 years, said the artwork was “overwhelming”. Mr Hoskins is pleased with how the artwork turned out.

He said: “I’m astounded and didn’t think it would look this good but it’s great and when you look at the words they mean so much.

“It’s about our whole community because that’s something very special about Badgemore. It’s a community school where people support each other. I think it will be great when people come in because it’s the first thing they will see.”