Parents happy to be sending children back to school 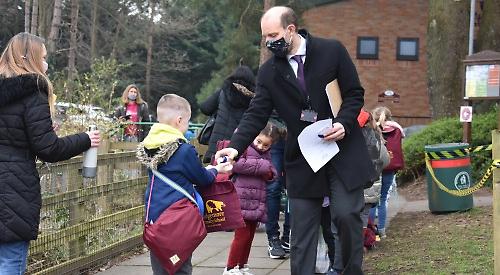 PUPILS from schools in Henley and surrounding villages have returned today after three months of home learning.

Children in all year groups were asked to return after the Government confirmed on February 22 the easing of lockdown restrictions.

Schools were forced to close on January 5 except for children of key workers and those deemed vulnerable. Others were learning from home using virtual lessons on Zoom and Google Classroom.

Parents were excited to bring their children back to Badgemore Primary School in Hop Gardens.

Their arrivals were staggered in classroom bubbles to ensure parents and teachers did not interact in large numbers and maintained 2m social distancing.

Tim Hoskins, head of the school, also made sure every pupil had used hand sanitiser before entering the building.

Zerrin Morris, who recently moved to Henley from Amsterdam, was “ecstatic” to be dropping off her son, Harry, six.

She said: “I was more concerned about keeping him at home as he was missing the school interactions, as amazing as the Zoom lessons were, it doesn’t replace socialisation.

“The home learning was a huge balance, the set-up this lockdown was better and the morning welcome Zoom sessions really helped Harry get into the mindset of school.”

Harry, who was excited to return so he could see all friends, said: “I’ve just moved here and I was a bit shy but now I am excited and happy because I know everyone.”

Paul Whitehouse was also happy to be dropping off his daughter, Gracie-May, six.

He said: “With the measures the school have put in place I’m very comfortable sending my daughter back to school.

“The home learning was a manageable process that needed to be done but I had to be furloughed for it to happen.

“The socialisation that children get in school is much needed after months of Zoom lessons.”

Philippa Excell, who was dropping off her daughter, Minnie, eight, said she had no concerns about the return to school.

She said: “It’s much needed and we’re really happy.

“The school has done lots to make us parents feel comfortable and to keep the kids safe.

“They just need to be at school, it’s been hard to juggle work and home learning.

“Minnie needs the socialisation you can only get from school as it’s really important.”

Breakfast and after-school clubs can also reopen and families will be encouraged to get tested regularly.

Children in primary schools will not need to wear masks but secondary school students will be expected to until Easter at the earliest.

He said: “We’re excited to have everyone back and we’ve been preparing for it properly for two weeks.

“We’ve made some more improvements from last time and it’s great to see the children are wanting to be back.

“At 9.10am when people are settled down in the classrooms I’ll be able to relax.”