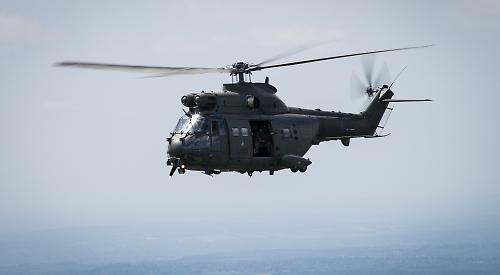 A PILOT from RAF Benson has told of his joy at being part of a fly-past for the Queen.

Flight Lieutenant Garry McKay, 35, took part in the finale of the Trooping the Colour ceremony in London on Saturday to mark Her Majesty’s official birthday.

He led the fly-past over Buckingham Palace, where the royal family watched from a balcony, in a Puma helicopter going at 90 knots together with a Chinook.

Flt Lt McKay was joined by
co-pilot Flt Lt Tom Woods and crewman Flt Sgt Nick Upton, who all are part of 28 Squadron, for the flight in the Puma HC MkII. He said: “It’s a great feeling to be in the seat where you could see the crowds on The Mall. You get excited but you’ve got other aircraft sitting very close behind so I was making sure the primary thing on my mind was keeping in the right formation.

“It was a wonderful sunny day and it was lovely to be flying over central London — a place we are not usually allowed to fly over so low.”

The fly-past included 29 aircraft from eight bases across the UK and finished with the Red Arrows display team flying Hawk T1 planes at 300 knots. Flt Lt McKay said the helicopters led the way because they were slower. “Because of the speed the aircraft are flying you don’t really see the other aircraft — everything is going on behind you,” he said. “Everything is timed so we flew over the palace at exactly 1pm.

“My co-pilot was in charge of making sure we stuck to the timing.

“It was the first time I have done it and these things tend not to come round very often so it could be a once-in-a-career event for me.”

All the crews met up at RAF Marham in Norfolk to prepare before doing practice runs at RAF Cranwell, in Lincolnshire.

Flt Lt McKay said: “It allowed us to practice as a package by flying over the college hall, which is where officers’ training takes place. It’s about getting the formation safely. You have a lot of very different aircraft at different speeds in a small airspace.

“Being part of a big package of aircraft is something we can be called to do in any operation around the world, so it has those benefits as well as being a ceremonial occasion for the nation.”

Flt Lt McKay thanked all the crew at RAF Benson for helping to maintain the Puma and getting it ready for the flight.

He added: “It’s not just about the crew but huge operation on the ground.

“Sixty to 80 people are working every day in the weeks running up to the event to make it a success.”

community , Trooping the Colour , The Queen