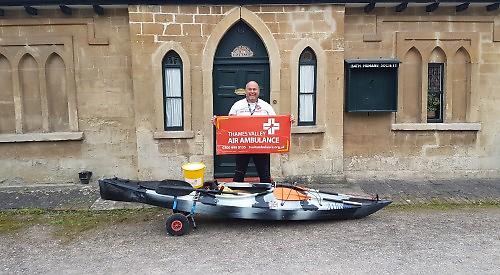 A LORRY driver from Benson paddled almost 90 miles in a kayak to raise money for the Thames Valley Air Ambulance.

Ian Trust negotiated 105 locks on his journey along the Kennet and Avon Canal and River Kennet from Bristol to Reading.

He set off at 5am on Wednesday last week and paddled to Bath and Newbury before arriving at the Wokingham Waterside Centre in Reading at lunchtime on Friday.

He was supported by friend Phil Diment, from Reading, who cycled alongside the waterways and helped collect donations in buckets along the way. At night he slept in a tent next to the river while Mr Diment slept in his van. Mr Trust, 51, of Porthill Road, said: “It was a hard and gruelling, both for me in the water and for Phil cycling the towpaths.

“The hardest part for me was getting in and out of the locks carrying the kayak and all my equipment 105 times.

“But to be honest it was sad that it came to an end — my body didn’t want to do anymore but mentally I wanted to carry on.

“There were lots of great sights and lovely people along the way.”

Mr Trust said one of the most memorable parts of the challenge was the 29 Caen Hill locks outside Devizes. He said: “Getting in and out at the locks was harder work than the actual paddling,” he said.

“It was a case of getting out and carrying the kayak a lot — it’s about three quarters of a mile uphill.

“I wouldn’t complain if I didn’t see another lock again for some time!”

Mr Trust, who is semi-retired and is also an author, raised £1,000 but he is to continue raising money for the charity’s helicopter, which is based at RAF Benson.

Next August he will attempt to paddle along the River Thames from the source to Thames Barrier. “It’s very local and a great cause,” he said. “The charity says it costs approximately £2,500 per mission so if we can raise £5,000 we can potentially save two lives.

“They do wonderful work and anything I can do to help I will. I know that the money raised will make a lot of difference.”

Mr Trust will hold a celebration party at his home tomorrow (Saturday) for those who donated. If you would like to attend, contact him via his Facebook page.