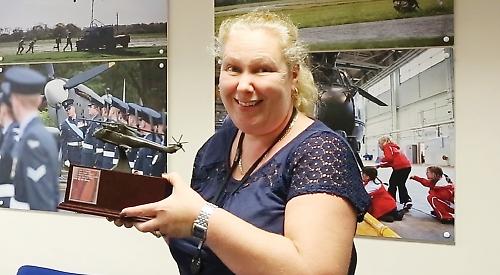 A WOMAN who effectively carried out four people’s jobs has been honoured by RAF Benson.

Janine Ansty-Bridges, who works in accounts flight at the base, was presented with its annual loyalty award for commitment, self-sacrifice and courage to work in or support of military life.

Her citation said: “Her loyalty to the station meant that Janine willingly and voluntarily took on many additional duties during a period of significant manning reductions, completing her own job and that of up to three other people to the highest of standards to ensure the flight continued to deliver an outstanding service.” She was one of several personnel recognised at the station’s annual awards dinner, which was named Benson 78 in recognition of the number of years it has existed.

Nominees included military personnel, civil servants and contractors who support the station and the winners in the five award categories were chosen by the station executives.

Corp Alex Clements and Gavin Colbourne were presented with the resourcefulness and innovation award for delivering a fully immersive driving simulator.

They were said to have “completed outstanding work in delivering a unique and challenging road safety project that is already having a great impact”.

The professional excellence award was presented to Debbie Wise, a caseworker for military charity SSAFA, for “an outstanding desire for continuous improvement”.

A member of the welfare and community committees, she was said to have been “invaluable in supporting personnel and their families through the complex issues that can often arise, both in everyday life and in dealing with the unique challenges of the military environment”.

Corp Lee Simpson, deputy manager of the warrant officers’ and sergeants’ mess, receiving the teamwork award for exceptional leadership and professionalism. His citation read: “Lee demonstrated his ability to motivate and encourage all who worked for him and will be greatly missed as he retires from the service.”

The spirit of Benson award, which is given to an individual who has achieved both personal and professional excellence, was won by Fl Lt Rob Causer for his dedication to the welfare and support of station personnel and the air cadets.

His citation said he consistently thought of how to make a difference to others and “his immeasurable impact on the morale and reputation of RAF Benson is a shining example of the very best of the station.”