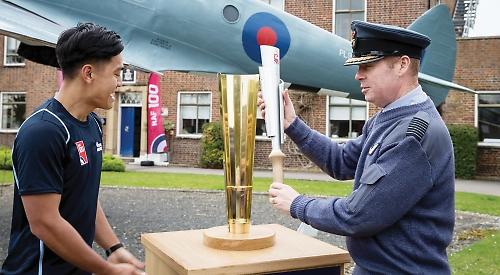 A BATON relay celebrating the centenary of the RAF visited Benson on Tuesday.

Flying Officer Kurt Lee, who is stationed at RAF Benson, arrived at the base after running from Wycombe Air Park. He was part of a team of runners that took four hours and 12 minutes.

The baton began its 100-day journey at the Royal Courts of Justice in London on Sunday and will visit 100 different sites associated with the RAF in the UK and overseas before it returns to Horse Guards Parade on July 10.

It will be carried by RAF personnel, cadets, veterans and members of the RAF sporting associations. It will be transported by boat along the River Thames by the RAF Rowing Club, carried by the RAF Falcons as they parachute from an aircraft, be ridden on horseback and power-kited along Benbecula in the Outer Hebrides.

Fg Off Lee, 26, an air traffic controller from Borneo, was also among the six runners on the first leg from the royal courts to the RAF’s first headquarters near Trafalgar Square.

He said: “I am very proud to be a Commonwealth citizen serving in the Royal Air Force and it was quite an honour to be chosen.

“The baton represents the RAF across the Commonwealth and the world and also the whole RAF family. It’s great to see such history in the RAF and it’s such an honour to be part of that journey.”

Fg Off Lee, who supports the RAF’s fleet of Puma and Chinook helicopters, said it felt surreal arriving at his own base.

“I didn’t think we’d get as big a reception as we did,” he said.

He and another member of RAF Benson personnel, Leading Aircraftwoman Lucy Ockenden, were among the first baton relay runners in London.

LAC Ockenden, 19, a trainee aircraft maintenance mechanic, said: “This was a wonderful experience for me. I have only been in the RAF for 11 months and could not turn this down. I am at the start of a great career with the RAF. My father was an aviation mechanic in the civilian world and being trained by the RAF will allow me to follow in his footsteps if I want to.”

The baton is made from brass, oak and aluminium to symbolise aircraft construction through the years and was designed and manufactured by RAF apprentices.

On Sunday, it was carried from central London to the RAF Museum in Hendon. On Monday it was taken by the RAF Cycling Association by personnel from RAF Northolt to the Bentley Priory Museum and then on to the Battle of Britain Bunker in Uxbridge. Fg Off Lee was part of a support crew for this part of the relay. On Tuesday it was taken by horse from RAF Northolt to RAF High Wycombe, where Fg Off Lee took charge of it. After Benson the relay visited Wallingford air cadets and then the John Radcliffe Hospital in Oxford.

Air Chief Marshal Sir Stephen Hillier, chief of the air staff, said: “In our 100th year we want to showcase the vital role the RAF continues to play in defending the British people and protecting our nation’s interests.

“The celebrations are a fitting recognition and thank-you to the exceptional dedication, spirit and achievements of our men and women. They also encourage us to look to the future: the greatest legacy of RAF100 will be its ability to inspire a whole new generation.”