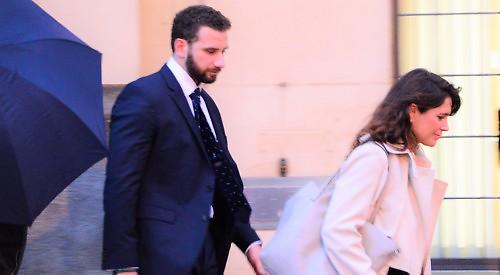 A ROYAL Air Force pilot who strangled his girlfriend has received a community order.

Flt Lt Timothy Barry attacked Squadron Leader Sarah Seddon, 40, in a bedroom at her home in Mill View, Cuxham, after the pair had been drinking heavily in the early hours of January 14, 2018.

The 31-year-old was found not guilty of attempted murder and causing grievous bodily harm with intent last month and appeared for sentencing at Oxford Crown Court on Thursday (December 19).

A jury of seven men and five women cleared him following a five-day trial and he admitted to an alternative charge of assault occasioning actual bodily harm.

As part of his 18-month community order, he must complete a 25-day rehabilitation activity requirement and 30 days of a building better relationships programme.

The court heard how the couple, who were both based at RAF Benson, had arranged a night out in Marlow to celebrate Ms Seddon’s return from deployment in Afghanistan.

Lisa Wilding, mitigating, said there had been an “extreme amount of alcohol” consumed on the night of the attack, but insisted there was no history of violence between them.

She said: “He has shown very significant contrition and remorse for the events of that night. This is a wholly unusual case.

“She has her own mind and her own voice and there is no suggestion that any incident of this type had ever occurred before.

“Extreme intoxication can lead to a loss of consciousness. I don’t suggest that alcohol alone was responsible for what transpired with Ms Seddon.

“This could not have been more spontaneous and instantaneous. He was clearly very emotionally disturbed at the time.”

She went onto say that Flt Lt Barry was a “highly skilled” pilot and was regarded as a man of “honesty and integrity” by his colleagues.

An argument they had in a taxi on their return home continued when Ms Seddon told her boyfriend she was leaving him.

He threatened to harm himself and later tried to take his own life, which his defence solicitor said demonstrated he was “not in his right mind” when he attacked her.

Her three-year-old son was sleeping in another room when she slipped out of consciousness and Flt Lt Barry called the police moments after, thinking he had killed her.

Ms Seddon had regained consciousness within 15 minutes of the paramedics arriving, while Flt Lt Barry was found with cut marks on both his arms and had also taken several tablets.

He was given first aid at the scene for “superficial lacerations” and then taken to the John Radcliffe Hospital in Oxford.

HIs girlfriend was left with red marks on her neck, but these had disappeared by the time she asked to discharge herself from hospital, claiming she wanted to go for a run.

Flt Lt Barry has since returned back to work with the RAF, but has been grounded. There was no order for costs because of his guilty plea at the first opportunity.

Flt Lt Andrew Keeley spoke at the sentencing and told the judge that an immediate or suspended prison sentence could be harmful to his career.

A spokesman said: “The RAF will consider the court’s findings and take any appropriate action. It would be inappropriate to comment further at this time.”

Sentencing, Judge Pringle said: “This was a serious and potentially fatal attack. While the injuries are minor, it is the potential of the attack that concerns me.

“You said you were going to kill yourself, or do harm to yourself, expecting her to come along out of sympathy. It was the act of a child and not a grown adult.

“What you did was put your hands around her neck, one of the most vulnerable parts of the human body. You were clearly very distressed when she seemed not to be breathing, although she was.

“I am totally satisfied that you are totally and genuinely remorseful of what happened and because of what you did to the woman that you love.

“You have demonstrated that you have taken steps to ensure that this type of behaviour never arises again. You were clearly under considerable stress at the time and underwent considerable counselling before returning to the RAF.”

He went onto say that Flt Lt Barry had spent years “risking your life on behalf of this country” and said he could not think of a better set of endorsements than the ones put forward during his trial.

Flt Lt Barry was deployed to Afghanistan four times. During his 2016 tour, his Squadron Leader was Ms Seddon, who was married at the time.When they started to have feelings for one another, he decided to move squadrons so that he was no longer in her chain of command.

Since the attack, the couple have undertaken counselling sessions over the phone.

Flt Lt Barry said: “I genuinely don’t recall how they [his hands] moved up. I didn’t really know what was going on, I just saw that I had my hands on her.

“I felt like my life was over, that I had ruined everything, that I was a monster.

“While I never wanted to cause Sarah any harm, my actions that day did and I have to take the responsibility that lies with that.

“I want to take responsibility for what happened but, of course, I wish I could go back in time.”