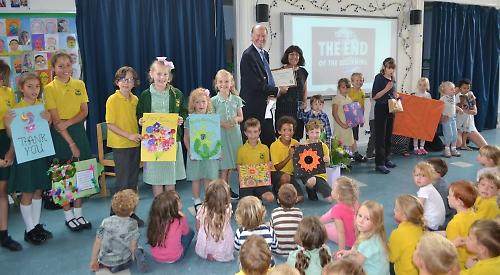 A TEACHER at Bishopswood Special School has retired after 41 years working with children.

Carol Parrey, 63, joined the school in the Eighties and was responsible for its expansion.

She worked mostly at the pre-school based at Valley Road Primary School in Henley but also helped out at the school’s two other sites at Sonning Common Primary School and nearby Chiltern Edge School.

Mrs Parrey lives with her husband John in Reading Road, Shiplake. The couple have two daughters, Lindsay, 27, and Elly, 25, and two Bedlington terriers.

She grew up in Kent and says she knew from a young age that she wanted to work with children.

After leaving school, she qualified as a nursery nurse and worked at Lanthorne Hospital School for disabled children in Kent, which no longer exists.

At this time education for special needs children was beginning to be provided at schools rather than at health facilities and Mrs Parrey witnessed many of the changes first hand.

She went on to train as a teacher at Trent Polytechnic in Nottingham, graduating in 1976, and moved to Oxfordshire to take up a teaching post at Borocourt Hospital in Rotherfield Peppard, which also no longer exists. She said: “What a learning curve it was: individual teaching programmes for each pupil, detailed observation skills plus an hour-and-a-half lunch break!”

Mrs Parrey joined Bishopswood in 1980 and soon afterwards helped launch one of the first integrated classes in the country at Sonning Common Primary School, followed by an infant class at the school and a nursery class at Valley Road, where she has spent most of the last 30 years.

She said: “The changes that I have seen since 1976 could not have been guessed at. To now see our most vulnerable children no longer shut away in remote hospitals but being accepted and educated alongside their peers is truly wonderful.

“It has not just been a benefit for special needs but a two-way process where children and parents learn tolerance and acceptance.

“I feel so very privileged to have had a job that I always loved and to have helped to change our society for the better. It’s all been about positive teamwork with children, parents, staff and other professionals.”

Mrs Parrey’s retirement was marked with an assembly at Valley Road school, where there was a slideshow of photographs taken during her career and children performed I Can Sing a Rainbow while waving coloured ribbons.

Mrs Parrey was given home-made cards and presents by pupils and staff, including a painting and a long string of 41 coloured balls, one for each year of her service.

Bishopswood headteacher Janet Kellett said: “One of the things parents say to me is how they appreciate the help they have had since their children were very little.

“As well as the pre-school, Carol helps us run the rest of Bishopswood too.”

Valley Road headteacher Tim Coulson said: “The reason why Carol is one of the easiest people I’ve worked with is because she tells it like it is. I have two kids and would like nothing more than for Carol to be educating them.”

Mrs Parrey was presented with a certificate by Michael Macfadyen, deputy lieutenant for Oxfordshire, along with fellow Bishopswood teacher Judi Stacpoole, who retired in April after also completing 41 years.

Mr Macfadyen said: “It’s my pleasure to be here today to recognise the outstanding service of Carol and Judi, for all they have done for the school and having made a huge impact.

“Both will be missed by parents and children alike.”

Mrs Parrey was rated as an outstanding teacher by Ofsted and picked up Oxfordshire County Council’s Excellence in Oxfordshire Award following an inspection in 2013.