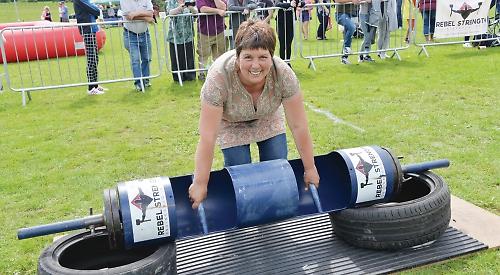 The event, which was held at Abbey Rugby Club, off Peppard Road, was organised by the Bishopswood School Association.

There were also traditional games such as hook-a-duck, hoopla and a coconut shy.

The event also hosted the south regional final of the Britain’s Strongest Man under 105kg competition.  It was organised by Vicky Doe, a member of the school association whose eight-year-old son Frankie, who has autism, is a pupil.

She said: “It was lovely to see the community embracing people with special needs and ensuring the event was a totally inclusive occasion.

“We are raising money for an eye gaze communication device which allows the Bishopswood children to communicate through eye movement. The equipment is life-changing for children who have limited verbal or physical communication abilities but each one costs more than £10,000.”

The event raised more than £3,500 and Natalie Lambden, from Asda in Lower Earley, presented the school’s headteacher Janet Kellett with a cheque for £200.

The association plans to repeat the event at the rugby club on August 11 next year.