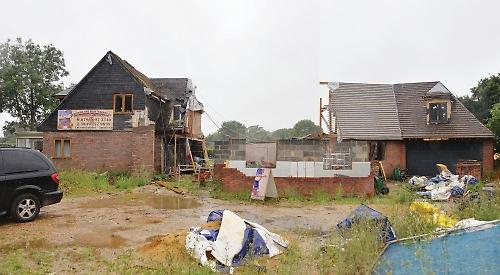 A FAMILY’S bid to transform their house into a “dream home” has turned into a nightmare after their builder carried out allegedly sub-standard work and then failed to finish.

Dawn and Naunton Cheesman paid Mariusz Noga £135,000 to renovate their five-bedroom property in Bix, where they have lived with their five children since 2001.

He was supposed to fill in the central archway which led to the garage, creating an additional bedroom, then build a new garage by extending the house to the north.

Instead, he demolished more than half of the house without consulting the family and failed to complete the replacement structure, leaving most of the property open to the elements.

There is no longer an internal staircase so Kiri and Starr, who share an upstairs bedroom, have to come downstairs using the old wooden staircase which Mr Noga bolted to an outside wall.

There is only a shower and bath on the ground floor so the girls must sometimes negotiate the steps late in the evening, even when it is cold and raining.

Mr Noga also removed roof tiles from that side of the house, leaving only a thin sheet membrane which leaks water into the girls’ bedroom as well as the boys’ bedrooms downstairs.

There is a large hole in the upstairs hallway ceiling, which is poorly covered by plastic sheeting and often leaks as well as allowing flies and other insects to get in. The family are constantly wiping away or bleaching patches of mould, which aggravates Enzo’s asthma, and have to sleep under layers of blankets during the winter to keep warm.

All the rooms and corridors are crammed with their possessions and they can only communicate between floors by text message or mobile phone.

Their only living areas are their kitchen and a £3,000 mobile home they bought last year. Both are cramped and unheated.

The other half of the house, which is uninhabitable, has no roof tiles and comprises mostly exposed internal beams with telephone and internet cables stretched across the gap where the hallway once stood.

A new basement has been dug out and lined with breeze blocks but there is no waterproof lining so this is slowly being infiltrated by moisture.

The Cheesmans say they are in limbo as they have spent more than half of their life savings on the project and are desperately seeking to find a remedy. Officers from South
Oxfordshire District Council, the building regulations authority, have told them that much of the work Mr Noga carried out was unsafe and might have to be redone.

One example is the corner line of a roof which doesn’t align with the corner of a supporting wall, making it structually unsound.

Mr Noga, who lives in Damer Gardens, Henley, and trades as Mariusz Builder, has not visited the site since Easter nor have any of his workers.

He says he is awaiting £65,000 in unpaid fees from other clients and will finish the job once he has received this money.

Mr and Mrs Cheesman, who met as pupils at Gillotts School, say they want another contractor to build a brick shell in order to make the property structurally safe and waterproof.

However, they would not have the money to install even windows and will save up to pay for more work to make the house habitable.

Mrs Cheesman, an illustrator, said: “Mariusz has taken so much of our money and ripped the heart out of this home but we’re close as a family and will come out through the other side of this.

“We keep each other strong through the difficult times, and there are plenty of those. Whether it’s sunny or rainy, we are living this problem and cannot escape it.

“Our friends and family have been wonderful throughout this and we’re always being invited round for dinner at various houses while the children attend sleepovers.

“Naunton and I are determined to keep a brave face. This will become our dream house in the end, no matter what, and in five years’ time we will look back on this as an adventure and a temporary setback.

“It’s hard for the children because we’ve brought them up to be kind, sensitive and respectful so they can’t see how someone could do this.

“When we had bad storms last winter, the rain came into Kiri’s bedroom and ruined all her schoolbooks. It was also pouring through the light fittings in the boys’ bedrooms, waking them up and soaking their beds.

“I called Mariusz in the middle of the night and insisted that he take action but all he did was staple on another layer of membrane and that hardly solved the problem.

“The mobile home is too hot in summer and too cold in winter and we have permanent problems with condensation throughout the house.

“When it gets cold, the children go straight to their bedrooms and it splits the family up when usually we do lots of things together. It’s disrupted our routine in a big way and we’ve just had to adapt as best we can.”

They cooked their turkey, which they won in the Henley Standard’s annual competition, at home then drove it over to the Ferebees wrapped in foil.

Mrs Cheesman said: “We were going to spend Christmas here but it all got a bit overwhelming. It is a very social time for us and we would usually have a big tree and lots of friends round.

“But last year we didn’t even have room for a tree. We’d usually get one from the Tree Barn at Christmas Common but instead we bought a little artificial one for £10 from B&Q.”

The family have opted not to take a holiday this summer in order to keep an eye on the property.

Mrs Cheesman said: “We’ve had offers to stay at other people’s homes instead but it’s not that easy to pack everything up and move somewhere else for a fortnight.

“The children have said we can have a Spanish-themed celebration in the garden and spend lots of time outdoors making Spanish food instead.

“This is not going to break us but we are struggling to find a solution and it’s hard to see light at the end of the tunnel. We’ve accepted that we probably won’t get our money back.”

The couple had been saving for the work since they moved in. They had the plans drawn up by an architect and structural engineer in 2015.

They paid Mr Noga a £62,000 deposit to start work and agreed to make further payments as it progressed. The final cost was to be about £190,000 and it was meant to be finished by the end of last year.

However, the family became concerned about the extent of the demolition work and lack of construction.

Mrs Cheesman said: “The demolition just kept on and on and when we asked what his overall plan was, he kept saying he knew what he was doing.

“We’d often come back and find something major had been knocked down without any warning.

“It was an absolute shock when he took the tiles off this side of the house – we pointed out that we were living in this area but he insisted it was the best way.

“He’s left the place looking like an amateur craft activity. Nothing appears professionally finished and there are loads of hanging wires and electrical equipment wrapped in plastic bags.

“His quote included £4,000 for scaffolding, which was meant to enable work in all weathers but we never saw any evidence of that.

“When they took the roof off the other half of the house, they left the gable end standing and it eventually collapsed, almost hitting one of his men, who was very shaken and never returned.”

As work progressed, Mr Noga and his men were carrying out less and less work, claiming they were either busy with other projects or unavailable.

Shortly before Christmas the family were contacted by several of Mr Noga’s suppliers, who said he owed them money and they were struggling to contact him.

Mrs Cheesman said: “He eventually came round and burst into tears, saying he had all kinds of money problems and was struggling.

“He brought in a series of builders and we saw more progress in the first few months of this year than ever before but those builders backed out one after the other, saying they weren’t being paid.

“They were very apologetic but said they just couldn’t continue. It was so disappointing as we really thought things were finally moving ahead.”

The couple issued Mr Noga with a written ultimatum at Easter to finish the work or give their money back to which he didn’t respond.

Mrs Cheesman said: “We’re generally civil people but it reached the stage where it just wasn’t on any more. Nothing has been done since Easter and it’s all up in the air now.

“It feels so unfair as we followed all the proper procedures in appointing a contractor but we’ve been left with virtually nothing. People are just gobsmacked when they see the state of the place.

“This was meant to be an exciting adventure but little by little we’ve been worn away by it. It’s soul-destroying to think that the work carried out over the past 18 months has been for nothing.

“We know there are people in worse conditions and aren’t looking for people’s pity but others need to be aware that this has happened.”

Mr Noga told the Henley Standard: “There is a problem with my situation and my business. Last year, too many people I worked for did not pay me and I don’t know if that is because I’m Polish but I am owed about £65,000.

“For example, one customer said she wouldn’t pay because my work was not good, even though the buildings inspector said it was fine.

“There is no problem with this work and I will finish the job as soon as I am paid. I have no money from my last jobs but if [the Cheesmans] could help me by paying for my materials I would finish it.

“I am not ignoring it and I am not going bankrupt or anything like that. It is not easy for me because of my situation.”