Woman issues warning about couple after dog is attacked on walk 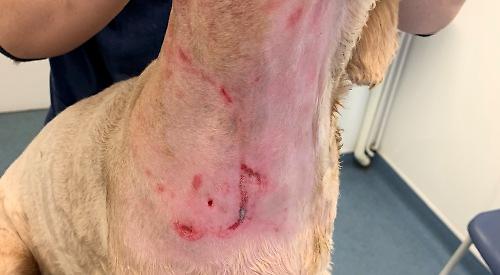 A WOMAN feared her dog would be killed when it was attacked by two Staffordshire bull terriers, writes chief reporter David White.

Susie Roskelly, 42, was walking her cocker spaniel Sprinkles on Bix Common when she was set upon by the other dogs who grabbed her by the throat.

Her three-year-old pet was left with several puncture wounds and swelling to her neck.

Mrs Roskelly, a chartered accountant who lives in Bix with her husband and two young children, was left shaken by the incident, which happened at about 11.30am on Wednesday last week.

She wants the owners — believed to be a man and woman — brought to justice before another dog is attacked.

The incident happened shortly after she’d arrived at the common and let Sprinkles off the lead.

As well as the bull terriers, the pair had another larger dog with them which Mrs Roskelly said looked like a cross between a husky and a German shepherd.

She said: “There wasn’t anyone on the common and these people came round the corner suddenly. Sprinkles ran towards them because she is very friendly. None of the dogs was muzzled or on a lead. They were growling at her and running at her like ‘we’re going to get you’.

“Before I knew it they had pounced on Sprinkles and the two Staffordshire bull terriers got her by the jugular and pinned her to the floor.

“One of them had her neck in their jaws and locked on her and wouldn’t let her go and was shaking her as if she was a rabbit or a toy. I thought they were killing her. I was screaming at the owner ‘get them away’. They were just watching. I was too scared to get involved because I thought the dogs were going to turn around and attack me.

“The woman casually walked over and took the big dog away and got one of the bull terriers off and handed me the one she had released and said ‘hold this’.

“She couldn’t release the jaws of the other one so the man then got involved and the whole time she was screaming at me saying ‘it’s your f***ing fault, you let your dog off the lead and she came running into our pack’.” Mrs Roskelly said the man managed to free Sprinkles after about two minutes.

She added: “The woman picked up Sprinkles and handed her to me and said, ‘here’s your dog’.

“I can’t tell you how traumatic it was — it was horrific. The owners had no remorse whatsoever. At that point I noticed that one of the people who runs Bix Montessori School was on the porch witnessing the whole thing.

“I was screaming at her ‘call the f***ing police’. I ran over to this woman and gave her Sprinkles and when I turned around the pair had gone.”

Mrs Roskelly, who has owned Sprinkles since she was eight weeks old, took her straight to Henley Vets in Reading Road.

“I described had happened and the first thing they said was ‘she’s lucky she’s not dead,” she said.

“They [the dogs] were pulling the skin away from her skeleton so she’s got a lot of swelling around her neck and three or four puncture wounds where their teeth went in. Luckily, they didn’t rip her open.”

Sprinkles has been given antibiotics and anti-inflammatory drugs and Mrs Roskelly said her pet is now “terrified”.

She said: “She’s the most gentle dog you could ever come across. She’s a small cocker spaniel, who weighs about 10kg and she’s a very submissive dog.”

Mrs Roskelly has reported the incident to the police.

She said: “I need people to know how dangerous these dogs are. I can’t let these people do this to someone else.

“Sprinkles is like my third child, she’s my baby and watching her potentially being killed in front of me and not being able to do anything was one of the most traumatic experiences of my life.

“I’m getting over the shock and the trauma of it. I’m going to be nervous going out on the dog walk for a while and Sprinkles is going to be psychologically scarred from it as well.”

The bull terriers are described as dark brown while the larger dog was dark grey. The couple were in their late thirties or early forties. Anyone with information should call the police on 101, quoting reference URN 1252 of November 27.