Friends restoring our Henley in Bloom boat to former glory 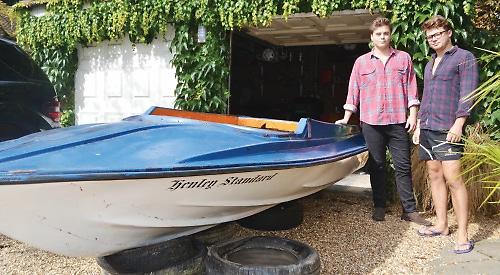 THE old boat that adorned the roundabout at the entrance to Henley from Reading could soon be back on the water.

Two childhood friends are restoring the 14ft wooden boat, which was named after the Henley Standard as part of our sponsorship of Henley in Bloom.

Students Henry Tipple and Will Clamp-Gray, who are both 20, hope to finish the work in time for next year’s Henley Royal Regatta and Henley Festival.

The pair bought the boat after seeing it for sale online and then discovered it was the one that had decorated the roundabout for six years until 2015 when it was replaced by a wire sculpture.

The boat had been donated by the Wermann family, from Henley, to replace one that had completed four years of service as a flower bed.

A regular at the Maltsters Arms in Rotherfield Greys, where Henry works when he is not at university, sold it to the pair for £110 last month.

Henry and Will, who met at Abingdon School and now both study at Newcastle University, have been cleaning and refitting the boat during their summer holiday and hope to install seats and an engine by July next year.

They plan to keep the vessel’s name and blue colour.

Henry, who lives in Chilterns End Close with his parents Tom and Sarah and sister Francesca, 18, said: “Will and I both used to row and my family used to have a boat moored on the river outside Hobbs of Henley but we don’t have that much experience with boats.

“We started working on it in July but I’ve been away, so now we are trying to get as much done as we can before going back to university next month.

“We want to build benches and hopefully we will be able to get six or seven people in it. We are taking each step as it comes — we don’t have much experience but that’s part of the fun. We are competent but not experienced.”

Will, who lives in Brightwell-cum-Sotwell with his parents Lawrence and Janita and brother Fred, 21, said they bought the boat almost on a whim.

“We were at the pub on a sunny day and thought it would be a great idea to have a boat,” he said. “We don’t have that much money so we decided to find one for £100 or £200 and put in an engine and restore it ourselves.

“We saw a boat that was only 5km away and it turned out it was in Henley. We got there and it was the Henley Standard boat that we had seen so many times on the roundabout.”

The pair have since bought another cheap boat to use as a trailer and may buy a third one to strip out the engine.

Henry’s mother, who is Harpsden parish clerk, helped them get hold of some spare wood from a building site in the village, which they turned into supports at the base of the boat. The pair plan to repaint the boat and to carpet the inside.

Will, who works at Leander Club during his holidays, said: “The boat was a bit dodgy and had a lot of soil in it so we cleaned it out and washed it down.

“It didn’t have a floor so we put in some wooden supports and a frame. We will paint inside and out but we want to keep the blue colour and the Henley Standard name.

“We aren’t looking to resell it as we want to be able to take it out next summer. We are going to do a lot of the work in September, so that it’s mostly done but without an engine.”

The pair have spent about £300 on the project so far.

“We are spending as we go and trying to keep it cheap but with restoration projects like this you can’t go too cheap or it will be a botch job,” said Will. “We know it’s not going to look incredible but it will be functional.”

Family and friends have joked that the duo will never get the vessel seaworthy, which has spurred them on.

Henry, who is also restoring a vintage car with his neighbour, said: “My dad loves the ambition but thinks it’s a bit far-fetched and our friends say we are idiots!

“We are trying to prove them all wrong. If anyone has a spare 40hp engine that would be lovely!

“At this year’s regatta we were out on a canoe, just the two of us. You can moor up right on the booms and have fun with some food and drink but it would be even better with a bigger boat.

“We are really keen to get this boat on the river because it’s going to be the most iconic thing out there!”