Being at disabled regatta is like winning gold medal, says Paralympic champion 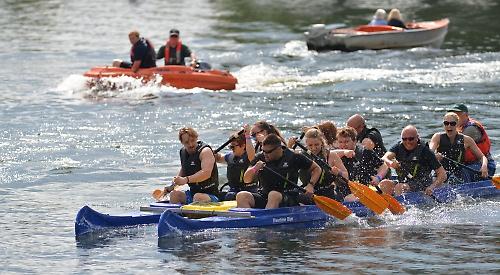 PARALYMPIC rowing champion Helene Raynsford was the guest of at the eighth annual Henley Regatta for the Disabled — and even had a go at commentating.

Hundreds of people attended the event in the grounds of Phyllis Court Club, off Marlow Road, on Saturday, when it was warm and sunny.

Dozens of disabled and able-bodied rowers took part in bell boat races between Henley Bridge and the paddock of the private members’ club.

The boats, which resemble two canoes bound together, replaced dragon boats for this year’s event and were supplied by Rivertime Accessible Boating at Bisham Abbey.

The winners were presented with prizes by Henley Mayor Kellie Hinton, who also handed out certificates for a land-based ergometer competition.

Raynsford, who won gold in the single sculls at the 2008 Paralympics in Beijing and is a patron at the regatta, was given a microphone to recount stories from her career before commentating on some of the action.

Raynsford, who uses a wheelchair and attended the event despite having had spinal surgery only a few weeks ago, said: “It’s fantastic to see so many people here and all sorts of different activities going on.

“I treasure my gold medal but for this is the power of sport and physical activity. The river is so therapeutic, whether you are out racing or relaxing in the boat while others are working.

“The regatta committee is brilliant and works tirelessly to put on a fantastic event, which is on such a huge scale now.”

Howell, who officially opened the event, said: “It has been a great pleasure to see the regatta grow every year. It’s a brilliant opportunity for those less able to enjoy the river and a lot of effort is put into making that possible. It’s very encouraging to see how popular it is and there are lots of things for people to do.

“The whole thing is extremely well and I pay tribute to the volunteers. I had a go the rowing machine but I don’t think I had a very good score!” Rivertime, a specially adapted boat with wheelchair access, was running free trips all day, while other attractions included motor boat trips, a climbing wall equipped for wheelchair users, an assault course for wheelchairs, a Punch and Judy show, a petting zoo and food and drink stalls. The Phyllis Court Singers, Sam Brown’s Fabulous Ukulele and singer Lottie Bell performed on the lawn.

Regatta chairman Mike Pooley said: “Henley should be proud of this event, which gives so much pleasure to disabled people and their families.

“People have enjoyed themselves and are already looking forward to next year.”

He thanked the patrons, his committee, including Hugh Legh, who provided the sound, the sponsors, volunteers, the Rivertime Boat Trust, Hobbs of Henley for the use of the motor boats, Phyllis Court Club for hosting the event, the Shanly Foundation and other local and individuals who donated money.