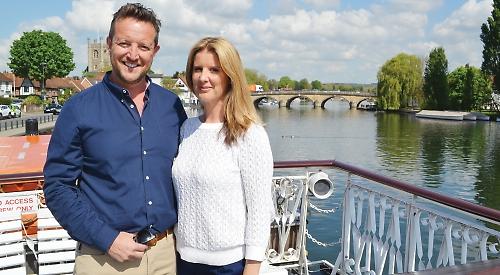 WITH the rise of electric cars, more people are starting to consider more environmentally friendly ways to travel.

Companies such as Tesla, Toyota and Kawasaki have made huge strides in bringing fully electric vehicles to the road and track in recent years.

E- has been founded by Gillian Nahum, who already runs boat company Henley Sales & Charter and has noticed a greater demand for electric vessels.

Her new company will import electric launches from abroad for both hire companies and private individuals, while also representing private vendors as brokers.

Electric boats, which are virtually silent and require little maintenance, have been around since the mid-1800s but have only recently begun to grow in popularity.

Experts are predicting that electric boating be a $20 billion business by 2027, with several European cities including Amsterdam and Venice banning diesel-powered vessels.

Ms Nahum says she hopes the use of electric boats on our waterways will also take off as improvements are made to the infrastructure.

“Electric boats have been around for more than 100 years but the resistance has been the same as that to electric cars,” she says.

“People don’t like change and don’t understand the technology so would rather not bother.

“Progress has also been slow in installing electric charging points but the Environment Agency is behind us on this and knows it needs to make an effort. There are actually five charging points on the River Thames in this area but many people don’t know where they are, even some of the lock-keepers!”

Ms Nahum has been selling electric vessels through Henley Sales & Charter for years but it was merely a sideline to the more traditional craft she is known for. She will launch the new business, which will focus exclusively on electric vehicles, at the London Boat Show, which will take place at the ExCel convention centre from Wednesday to Sunday next week.

The company is named after her former businesses , a shop in Friday Street, which sells nautical-themed clothing and accessories.

Ms Nahum opened the store in 2012 and sold it to businesswoman Juliet Campbell last year so she could concentrate on selling boats.

Now she has two companies aimed at slightly different markets.

“There was an environmental consideration to E- but I also didn’t want people to think Henley Sales & Charter was going that way.”

Ms Nahum will be taking the E- new flagship boat, a 27ft launch called Ferryman, to the London Boat Show.

The £50,000 vessel was made by Patterson Boatworks in the Lake District. It is made from cedar wood using the cold-moulding technique in which small layers of wood are stuck together with epoxy adhesive to create the larger skeleton.

Ms Nahum says: “Ferryman looks quite traditional in terms of styling but the construction was very modern. Patterson is a company we have already taken orders for and their products are beautifully handmade.

“We have always loved working with smaller companies as we like their charm and encouraging people with their skills.”

Ms Nahum was keen to work with other Henley companies on the new venture. Henley Technical Services, based in Green Lane, built Ferryman’s electric propulsion system, and much of the branding was done by Twenty One Twelve Marketing, which is based at Badgemore Park Golf Club.

The boat is named after Ferryman’s Gold, an award-winning beer made by the Loddon Brewery in Dunsden and Ms Nahum will be handing out bottles at the launch.

She attempted a “soft launch” of the business at the Southampton Boat Show in September and says interest in electric boats is on the rise.

She says: “We had an electric boat at the show which was flying an E- flag.

“As a we have already sold a couple of electric boats and we’ve had a very busy couple of months.

“One man came up to me at Southampton and said he was a Tesla driver so why would he have anything other than an electric boat?”

Ms Nahum, a former director of the Henley Business Partnership, says she hasn’t attended the London show for several years but believes it could be the perfect venue to launch E- .

She says: “It has been probably nine years since I went in any capacity but to be there in our own right with our own branding is a first in many years. London was usually 10 days long and hugely expensive and there was a thought in the industry that it had lost its mojo.

“It had gone from being a large, popular show to quite a remote one at ExCel with a diminishing number of companies exhibiting.

“This year it has been rebranded and is shorter, which I think is a good thing as you need staff to live in London during it.

“Because lots of press go to the show, we thought that if we were going to launch a new company maybe this would be a good place to do it. We will give it a go and have the boat there. We will have information about Henley Sales & Charter too but we are essentially talking about electric boats.”

E- will not be the only Henley boat company to exhibit at the show.

Representatives of Hobbs of Henley will also be there handing out information about the company’s Henley Boat Club scheme, a luxury boat share initiative.

Owner Jonathan Hobbs will also be available to speak to visitors about boating holidays on the company’s motor cruisers and be handing out samples of Mr Hobbs gin, which the company launched last year thanks to Mr Hobbs’s wife Suzy, who is responsible for the company’s marketing.

Mr Hobbs says: “We have exhibited at Southampton before but this will be our first ever London Boat Show.

“We feel the new shape of the show, with an emphasis on inland boating, suits our offer and we are looking at taking on more Henley boat club members in 2018.

“The London show could introduce potential new ones to us.”

Meanwhile, Ms Nahum hopes that E- can grow to become a hub for electric boat owners and she may even consider branching out into other kinds of electric vehicles.

She said: “I hope Eboatique will get big enough that it can have its own yard and showroom and become a go-to point for people who want to know more.

“As well as selling boats, we can also follow up with maintenance as we have lots of knowledge in this area through Henley Sales & Charter director Stuart Roberts and Henley Technical Services.

“We want to have lots of up-to-date things like charging points and become a resource for electric boat owners.

“It’s possible that E- can become a place not only to buy an electric boat but also other kinds of electric vehicles — that would be our ultimate aim.”