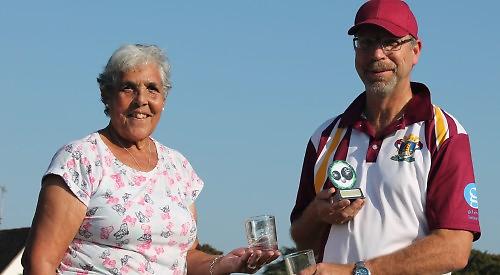 LIKE most clubs, Shiplake had a dearth of competitive bowling this season.

After initially starting the summer closed, Shiplake were able to organise some in house matches in July.

The main event focused on the annual “Points” competition where every Monday of each week players were able to put their names forward to be matched with different available partners for a pairs match, played either in the afternoon or an evening session.

On the odd occasion, due to player numbers that were available, singles were played which could potentially throw a spanner in the works. Each match consisted of 14 ends with just one point (or shot) awarded for each winning end (for each player) and the total for each weekly match added to the player’s total and the total divided by the number of games played to get an average overall score.

All in all there were 21 qualifying players with a maximum of 12 matches available to play.

The first three or four weeks saw a number of players vying for the lead with five or six strong contenders but as the weeks past and the results came in, the competition narrowed with David Lloyd, Daphne Jacob, Pete Christmas and John Gutteridge the front runners.

Gutteridge had floundered slightly after losing 8-6 on the third week but then began to build decent momentum thanks to some outstanding performances from all his allotted partners which helped to keep his average to just above nine points.

Jacob kept up the closest but a couple of unfortunate losses at the end of July and early August proved her undoing and despite some strong performances in the latter stages finishing with an average of 8.4, was not able to deny Gutteirdge his overall lead of 9.2 to claim this year’s “Points” trophy, known this year as “Covid Pairs” 2020.