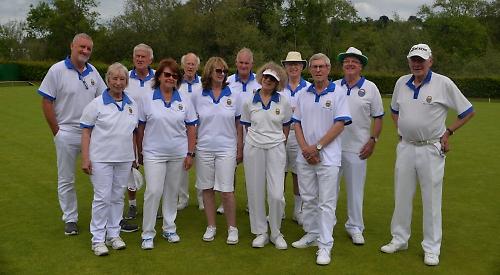 HENLEY ran out 53-52 winners in their home friendly with PALMER PARK MEN on Tuesday last week in a three triples friendly, despite losing on two rinks.

Barrie Davies, with Dave Palmer and Peter Borsberry, were five up after eight ends before going on to lose 17-14.

Kevin Browne, with Nigel Bridges and Jim Walter, were five down after seven ends, but picked up a five on end eight to draw level before going on to lose 21-15.

David Burdon, with Richard Kingston and Andy Scott, were level 7-7 after five ends and 12-12 after 10 ends. From there, they didn’t look back, running out winners 24-14.

HENLEY went down to a 91-51 defeat at MAIDENHEAD THICKET in a four triples mixed friendly on Wednesday of last week, losing on all four triples.

Steve Sullivan, with Nigel Bridges and Peter Borsberry, lost out 16-15 while Barrie Davies, with Steve Isaac and Maurice Robins, lost 25-15.

Andy Scott, with David Maybury and Jim Walter, were two up after four ends but were never in the match, losing 27-12 while Norman Daniells, with Richard Kingston and Kevin Browne, lost 29-8.

Peter Borsberry, with Joan Edwards and Steve Sullivan, had the highest winning rink with a shot difference of 18, having raced to a 14 shot lead after five ends, but dropping a six on end seven before eventually finishing 30-12.

Angie Isaac, with David Maybury and Steve Isaac, had the closest of games before running 24-22 winners.

Colin Ward, with Lynn Sayer and Norman Daniells, struggled from the start and were 16 down after 11 ends. They then picked up a four before eventually losing 24-9.

Dave Wilson, with Rosie Maybury and Kevin Browne, were two down after nine ends before Jeanie Davies replaced Maybury. Henley didn’t look back from there on, running out 27-15 winners.

The hosts won on three rinks and by 80 shots to 58 to secure 11.5 league points to the visitors 2.5. Norman Daniells, with Steve Isaac and Jeanie Davies, raced into a 23 shot lead after 13 ends, but dropped 11 on the last five ends to run out winners 26-14.

The other three rinks started slowly and were all down at least six shots after six ends.

Dave Wilson, with Joan Edwards and Rod Grant, scored regularly after six ends to narrowly win 21-18. Angie Isaac, with Andy Scott and David Burdon, were 11 down after 10 ends, then picked up eight on the next two ends, but couldn’t maintain their momentum, going down 16-11.

Barrie Davies, with Angelika Crisa and Richard Kingston, picked up after six ends, winning 10 of the remaining 12 ends to win 22-10.