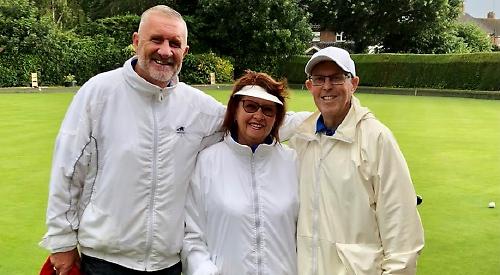 HENLEY lost out in their Oddfellows Triples League clash at PALMER PARK on Wednesday of last week despite winning on four of the five rinks.

The visitors went down to an 80-79 defeat but picked up eight league points to the hosts six.

Dave Wilson, with Angie Isaac and husband Steve, were four shots down after nine ends but picked up the pace, running out 16-10 winners.

Simon Hatcher, with Peter Borsberry and Romy Painter, led from the start to win 17-12 while Colin Ward, with Kevin Browne and Jeanie Davies, were six shots up after seven ends, pegged back to 12-12 after 17 ends but picked up one on the last end to win 13-12.

Norman Daniells, with Andy Scott and Angelika Crisa, were 6-6 after five ends but dropped seven shots on end six before going down 32-14.

Barrie Davies, with Steve Sullivan and Joan Edwards, were nine up after eight ends, pulled back to 14-14 after 16 ends then picked up five on the last two ends to run out 19-14 winners.

This annual tournament is just for the teams participating in the Oddfellows Triples League and all clubs except Pangbourne entered a team. The Oddfellows also submitted a team.

The round robin tournament consisted of two pools with the final being contested between the two pool winners.

Henley failed to make the final as they only won two games. The final saw Palmer defeat Burghfield.

Colin Ward, with Angelika Crisa and Maurice Robins, were always in command and ran out convincing 27-6 winners.

Peter Borsberry, with Nigel Bridges and Lynn Sayer, were level after seven ends, five shots up after six ends, level again after 12 ends before going down to a 20-15 defeat.

Barrie Davies, with Joan Edwards and John Wilkinson, were level at 8-8 after 14 ends then pulled away to run out 15-10 winners.

Andy Scott, with Jeanie Davies and Martin Taylor, were one down after eight ends then picked up their game, running out 21-9 winners.

On Sunday HENLEY ran out 109-83 winners in their home five triples Oddfellows League match with SHIPLAKE, winning on four rinks to pick up 12 league points to the visitors’ two.

Norman Daniells, with Jeanie Davies and Richard Kingston, were seven shots up after 11 ends then scored heavily to run out convincing 31-5 winners.

Barrie Davies, with David Burdon and Romy Painter, dropped six shots on the first two ends and struggled to get into the match going down 29-12.

Dave Wilson, with Steve Isaac and Angelika Crisa, were neck-and-neck after 13 ends before managing to edge ahead to win 15-14.

Colin Ward, with Angie Isaac and Peter Watkins, were eight shots down after seven ends but picked up the pace to run out 26-16 winners.