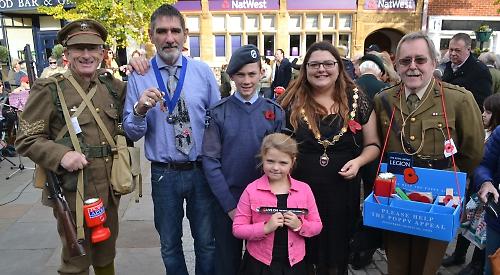 The appeal was officially launched in Market Place on Saturday when Mayor Kellie Hinton bought the first poppy from officials of the Royal British Legion’s Henley and Peppard branch.

Poppy sellers began collecting from visitors and shoppers as they sold not only the traditional poppies but also much larger versions, crosses adorned with the flower and wristbands.

The launch featured performances by singer Sam Brown, from Sonning Common, and ukulele orchestras who played songs including Jolene by Dolly Parton and Thirties favourite You Are My Sunshine.

Cllr Hinton said: “I’ve been supportive of the appeal for a number of years and used to sell poppies.

“This is an important time of year to educate our children on why they have the freedoms they have.

“I love that the appeal is a big thing in the town. I want everyone to buy a poppy. It doesn’t take a lot to put a bit of money in the pot.” She said she had first become interested in the appeal through the Lest We Forget project in which Woodcote amateur historian Mike Willoughby identified every solider from the Henley area who died in the First World War so that they could all be commemorated on new memorials.

Appeal organiser Annie Arscott said: “We have an army of volunteers who will be doing street and house-to-house collections. That’s the key to raising funds.

“Last year, Henley raised £23,000 from the appeal alone. With other things during the year, that can go up to £35,000, which for a town of the size of Henley is phenomenal.

“We are grateful to everyone in the town who supports the appeal.

“The money that is raised by the Royal British Legion makes an enormous difference, not just to the injured but also those who need support later in life.” Mrs Arscott said the Legion’s theme this year was “rethinking Remembrance” and what the appeal means in the modern day.

The Remembrance parade service will be held on Sunday, November 12 at 11am. A shorter service will take place on the town hall steps at 11am on Armistice Day (November 11).

Cllr Hinton and Cllr Eggleton will be visiting schools in the town to ask pupils what Remembrance means to them and there will also be a poppy installation at Makins recreation ground off Greys Road next Friday.

Anyone interested in selling poppies should call Mrs Arscott on 07702 130432 or send an email to
poppies@anniehenley.com