Now pubs and restaurants copy Eat Out to Help Out 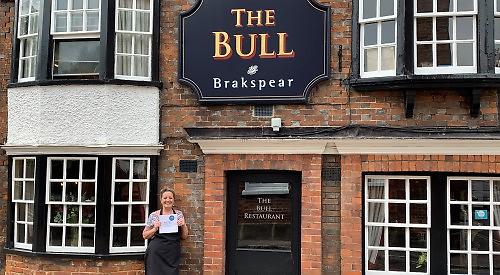 PUBS and restaurants in the Henley area have introduced their own versions of the Eat Out to Help Out scheme.

They hope to maintain the huge growth in custom experienced as a result of the government scheme, which offered 50 per cent off food bills from Monday to Wednesday during August with a maximum of £10 per head.

Businesses said the scheme was very successful in encouraging people to go out again following the coronavirus lockdown and some are now funding their own versions.

The Catherine Wheel in Hart Street, Henley, has launched Stay Out to Help Out in which the price of food and drink is reduced from Monday to Wednesday until November 11.

The pub is part of Wetherspoon, whose founder Tim Martin said: “The Eat Out to Help Out scheme was extremely popular with our customers and a great boost to the hospitality industry.

“We are keen to offer our customers a superb choice of food and drink at great value-for-money prices.”

The Last Crumb in Prospect Street, Caversham, is offering customers who visit between Monday and Wednesday 40 per cent off food that is eaten in.

Manager David White said the Government’s scheme was very successful for the pub and more than doubled normal footfall.

He said: “We were pretty much full and with a queue out of the door every day. It brought lots of new customers to us and they came back at the weekend even when the offer wasn’t on.

“We didn’t do bookings, so when a customer couldn’t get into somewhere else they came to us and we managed to get them in.

“It was such a success that doing it without the government money is obviously not going to be as good, but we’ve run the numbers and we are confident that it will be profitable.”

Jayne Worrall, who runs the Bull in Wargrave, is offering a 25 per cent discount on food from Monday to Wednesday during September.

The offer applies to a “selected but varied menu” and is a maximum of £10 per person.

She said: “August was really successful. There were days where it was like a madhouse and the evenings were particularly busy. It was a great success and the whole team worked extremely hard.

“I would say we had at least double our usual footfall. This is normally a winter pub, but most evenings we were doing 45 to 50 covers. I was having to turn away as many as 40 people a day. It was a shame we couldn’t take in everybody or spread it out.

“When it came to doing my own scheme, I thought about it a lot. If I have 30 people in here paying 25 per cent less, it is better than having 10 people at full price.”

Mrs Worrall, who first ran the Brakspear pub in 1980, said she was anxious when the lockdown began in March.

She said: “I always try to be positive but I have missed out on four months of trading and our turnover will be poor compared with previous years.

“I’m just relieved that I’ve come out the other side and I’m still here and long may it continue.” Chef Paul Clerehugh, who runs the Crooked Billet in Stoke Row, said Eat Out to Help Out was successful for his business.

He said: “Turnover was up at the restaurant by about 10 per cent and it changed the shape of the week — Monday to Wednesday became Friday to Sunday.

“You could have a record Wednesday and then find yourself scratching around a bit on Thursday.

“I noticed that country restaurants and pubs, particularly those with gardens, did reasonably well.

“The impression I got from Henley was that there was a very convivial atmosphere and it was nice to see so many people enjoying al fresco dining.

“I chose to do the scheme because I thought it would be a nice gesture to give our regular customers a discount.

“However, I’m not entirely comfortable with how I feel morally because the restaurant would have been extremely steady anyway and it felt we were taking money from the Government.”

Mr Clerehugh added: “Financially, it wouldn’t be viable for me to extend the discount.

“I already offer a fixed price menu of two courses for £19 and am effectively doing my discount with that.”

Mary Galer, who runs the Miller of Mansfield restaurant in Goring, said: “Monday to Wednesday became the new Friday and without any impact on Friday and Saturday, which was a slight concern when we started out.

“We’re talking about bringing it back but perhaps in a couple of months’ time as we rely heavily on our outside space to accommodate people and won’t be able to use that in the winter.”

Tom Davies, chief executive of Brakspear, said: “Eat Out to Help Out has had a really positive effect overall across our pubs who ran the scheme.

“It really seems to have captured everyone’s imagination and we saw trade in the early week in some sites increase to levels of a busy weekend. which is unheard of.

“Most importantly, though, it encouraged people out of their homes and back into the pubs and gave us the opportunity to show that they are safe environments to eat, drink, stay and have fun.”

The Harris + Hoole coffee shop, on the corner of Duke Street and Hart Street in Henley, also enjoyed a boost in trade in August.

Andrew Sanders, head of the chain, said: “As a group we found it beneficial and certainly on the days that the scheme was running. Sales were up significantly across all our shops.

“My team in Henley handled it very well. It probably added about 15 per cent to our sales on those days. Our frustation was with the app which the Government created. If you are part of a company or chain with lots of locations, the individual sites didn’t appear on the map. We did have some signage and that was helpful.

“It certainly encouraged people to get out. The problem was we had to limit the number of tables and chairs and the scheme only applied to people who were eating in.”

He added: “Unfortunately, it would not be viable for us to do it in September. We have lost a lot of money over the period that we were closed and we are trying to recover some of that money.

“Although Henley is bucking the trend for most shops and chains like ours, we need to be trading at 80 per cent compared with last year just to cover our costs.

“I think it might be nice to have the scheme reintroduced in the winter months when it gets cold and dark.”