A HEALTH and safety firm from Henley is to sponsor British athletes to take on the world.

Pristine Condition, of Northfield Road, was founded by Davy Snowdon, a former British weightlifter and coach, in 1996.

He was the Team GB conditioning expert covering all sports at the Olympic Games in Barcelona in 1992 and Atlanta in 1996.

His company specialises in manual handling training and has more than 2,000 clients worldwide.

It is sponsoring the British mens weightlifting squad to attend the world championships in Almaty, Kazakhstan, in November and three athletes to compete at the European junior and under-23 championships in Limassol, Cyprus, in the same month.

Mr Snowdon, the firms managing director, said: Weightlifting has been in the wilderness a little bit and, as there is no funding for the British team for the world championships, I was very proud to put the funding.

I grew up with weightlifting and with the business being born from a passion for weightlifting, we are absolutely delighted to be able to provide the funds to send the squads to the world and European championships.

At the Commonwealth Games in Glasgow this year the British team won five medals and took six fourth place finishes, which was not only a fantastic achievement for the young sportsmen and women but played a significant role in raising the profile of the sport in the UK.

By funding the mens squad at this years world championships, we hope to build on that success and increase awareness of the sport on a world stage. 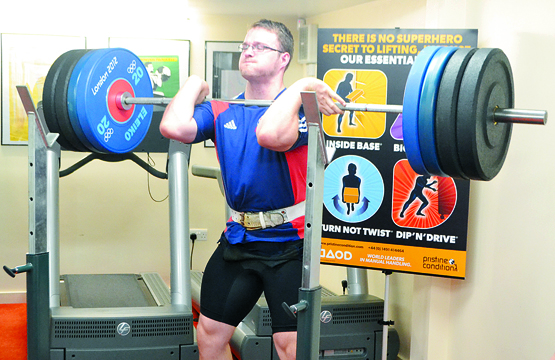 Members of the British mens and womens weightlifting teams visited the business on Friday.

They included Owen Boxell and Emily Godley, who both came fourth at the Commonwealth Games.

Michael Pearman, lead coach of the England weightlifting team at the Games, said: Davy came up with this idea to help to help with the funding and give the squad the extra help they needed.

We are over the moon to receive this sponsorship and we hope it will muster the team. The next Commonwealth Games seem like a long way away but we have the potential to win a lot of medals so it is good to give these guys every opportunity.

Mr Snowdon also plans to establish a training facility at the company to allow the England squad to undergo intense training and education sessions before the 2018 Commonwealth Games.

Earlier this year, he was awarded the MBE for services to health and safety at work and for charitable services in Oxfordshire.

Mr Snowdon, who coached Britains womens weightlifting team to the European championship title in 1992, said: The health and wellbeing of workers is at the heart of everything we do and we work hard to ensure that we fully understand and support the ever-changing needs of our customers.

By listening to the market and investing in our own staff, we have introduced unique, habit-changing tools that are really making a difference to the health of the nation and easing the strain on the NHS.