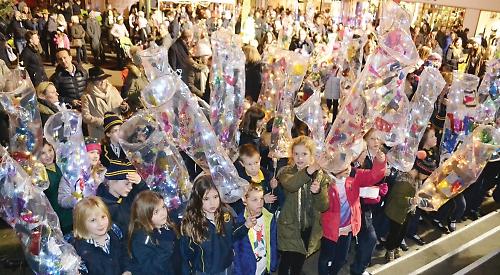 Roads in the town centre were closed to traffic and instead filled with stalls, fairground rides and performers for the 25th annual celebration on Friday evening.

The climax was the switching-on of the lights on the 29ft Nordmann fir tree in Market Place.

Visitors wore hats, gloves and scarves as the temperature fell to around 2c and some had festive costumes including Santa hats, reindeer onesies, elf outfits and Christmas jumpers.

The event was officially opened by town crier Ian Beyts, who led a children’s lantern parade through the town at 5pm.

About 100 pupils from the town’s primary schools had made their own lanterns using fairy lights, shiny paper and sticks of bamboo.

Mr Beyts was accompanied by Father Christmas, who was stopped several times by children wanting to give him a hug or have a photograph taken with him.

When the parade reached the town hall the children gathered at the bottom of the steps, where Mayor Julian Brookes asked them to shout out the names of their schools before declaring the festival open.

Father Christmas then left to set up his grotto at King’s Arms Barn, where children queued up to visit him and receive chocolate from his elves.

There was a “wishing tree” outside the grotto, run by members of Henley in Bloom, where youngsters could write a festive wish to hang on a branch.

Dozens of schools, businesses and community groups had stalls at the event, including Henley Lions Club, the Chiltern Centre for disabled children and the Henley branch of the RNLI.

There were games including a shooting gallery using darts and balloons and a rowing challenge organised by Henley Rowing Club. Many of the stallholders wore Santa hats or reindeer antlers.

New Christmas lights, which were bought by the town council earlier this year for £46,000, were strung across Reading Road, Duke Street, Friday Street and the western half of Hart Street.

There were also upward-facing lights on the sides of the town hall and other lights to illuminate trees in Gravel Hill, Market Place, Singers Park, Red Lion Lawn and Northfield End.

Food and drink was available throughout the evening and there were fairground rides, including a Ferris wheel and a helter skelter.

Firefighters from the fire station in West Street had brought their fire engine to the town hall, where children could sit in the driver’s seat and try on the uniforms.

Carol singers performed around the town centre and children from performing arts workshop Stagecoach gave a display of singing and dancing on the town hall steps.

The lights on the Christmas tree were switched on by the Mayor and Poppy Skidmore, an 11-year-old pupil at Badgemore Primary School, who won the Mayor’s Christmas card design competition.

Poppy’s winning entry depicted a snowman on Temple Island with a decorated Christmas tree and snow falling. They were joined on the town hall steps by a representative of Invesco Perpetual, which paid for the tree, Gillotts School headteacher Catharine Darnton with the school choir and new Henley College principal Satwant Deol.

Compere Martin Unsworth introduced them all to the crowd and joked that this year’s tree was holding up better than last year’s, which shed its needles early. Last year’s 40ft Sitka spruce came from Elveden Farm Estate in Norfolk but was deemed unsatisfactory by councillors as many of the branches were bare by Christmas. This year, the tree was selected from the Tree Barn in Christmas Common by the Mayor.

Mr Unsworth encouraged everyone in the crowd to shake the hand of the person next to them and wish them a merry Christmas.

He then led a practice for a “very nervous” Poppy before the real countdown from 10 after which the tree lit up to cheers from the crowd.

Everyone then sang a round of Christmas carols including O Little Town of Bethlehem, Silent Night and Ding Dong Merrily on High led by the Gillotts choir and the choir from Henley Baptist Church accompanied by the Marlow Town Band. Many shops in the town stayed open late, some serving mince pies and mulled wine to customers.

There were big queues outside Gabriel Machins butchers in Market Place, which was serving hot dogs.

Owner Barry Wagner said: “It was a great evening with lots of people around and we were very well supported. The atmosphere was great.”

Laurence Morris, who runs Laurence Menswear in Duke Street, raised more than £150 for the Thames Valley Air Ambulance by selling mulled wine and rock cakes to customers and also had a magician to entertain children.

Darren Gillett, new landlord of the Station House pub in Market Place, said: “It was extremely busy and everyone seemed in a festive mood. With us having been open for only a week, lots of people came in to see the pub and we’ve had a lot of bookings from it.”

The Chiltern Centre held a joint stall with learning disability charity Mencap. They held a raffle which raised £900 and had a lucky dip provided by Starbucks where children could pick out chocolate and sweets.

Fund-raiser Liz Deacon said: “We had lots of visitors and we were giving away free Prosecco to thank people for their support over the last year.

“It’s a really nice evening with a great atmosphere and town was full of families, which was good to see. It was a great start to the Christmas period.”

John Moore, of Henley Lions, said: “It was brilliant. We don’t go to make money but we talked to a lot of people and had a competition to win a stuffed toy lion, which is always popular with the kids.

“The festival always gets everyone out and together and the town looks lovely. It’s a great idea and gets everyone in the Christmas mood. The lantern parade in particular I thought was beautiful.”

Zoe Taphouse, from Caversham, who attended with friends and her son Louis, nine, said: “We come every year. It’s great that we can give something back because our children go to school at Gillotts.”

Anya Mikulski, from Henley, who was with her husband Peter and 21-month-old daughter Mia, said: “There’s lovely atmosphere. There’s lots going on and lots of attractions for little ones. The Christmas spirit is all around.”

Sophie Floyd, from Henley, was at the festival for the first time with her husband Richard, and children Eva, two, and William, four.

She said: “The kids can see all the lights and we’re feeling festive.”

Jason Lunnon, who was dressed in an elf suit, said: “I’ve got seven grandchildren with me in the town. It’s the start of Christmas and it’s just nice to see people out enjoying themselves.”

Alistair and Nga Wildman, of Reading Road, Henley, were there with their daughter Isabella, two.

Mr Wildman said: “We’ve been here three years and we love the festival, it’s a really good evening out. I love Henley.”

Natalie Bishton, who grew up in Henley but now lives in Wooburn Green, was there with her husband Mark and one-year-old son Charlie.

She said: “I come every year. I’m always back in Henley as my mum lives in Damer Gardens and I still have my opticians here!”

Councillor Brookes said: “People have told me how much they enjoyed it, especially the switching-on of the lights and the carol singing.

“There were some great activities and we are trying to make sure it gets better each year. I’m going to claim some very small responsibility for the tree, which we are very happy with!”