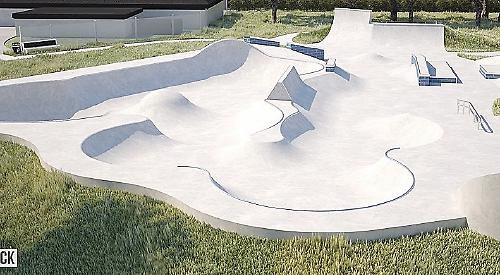 Contractors started work on the project in March and expect to complete it in August.

They put up security fencing around the site at Makins recreation ground, off Greys Road, and laid a drainage system before marking out footpaths and laying the stone foundations for the obstacles.

They have installed the metal “lips” that will go around the edges of each feature and last week Manor Mix, of Peppard, began pouring and moulding concrete inside them.

This last step had to wait until the weather improved as it had previously been too wet for the concrete to dry properly.

The new “wheeled sports facility” will have sunken obstacles rather than hollow metal ones, which will reduce noise, and will cater for BMX bikers, skateboarders and roller-skaters.

It has been designed by Maverick Industries, of Dorset, for Henley Town Council and will replace the original facility, built in 2004.

Colin Brathwaite, chairman of the Henley Skatepark Initiative, said: “The build is meant to take about 16 weeks though it’s very dependent on the weather. It’s going very well so far.

“There’s still more steelwork to come but you can see the pathway and most of the basic features. It’s really exciting to see.”

The new facility, which has been six years in the planning, is likely to be officially launched with demonstrations by professional skaters.

Mr Brathwaite said: “It’s taken so long to get this off the ground that it’s easy to forget that this is actually happening. We’re looking forward to the opening.”

An anonymous supporter loaned a further £20,000 so the work could begin and the initiative is now raising the money to repay this. Henley town councillor Glen Lambert, who lives in Greys Road and took the photograph above, said: “I go past the site every time I walk into town and I always go into Makins for a quick look at how it’s progressing.

“It’s really interesting to watch. I feel like I’ve watched it unfold in front of me, like watching a ‘stop motion’ video.

“I was quite proud of the photo I took — it was around sunset and the light was perfect. I had to stand on a railing and hold my camera as high in the air as possible. I should have asked Colin to do it as he’s taller!

“The skate park should bring a huge benefit to Henley because I see lots of skaters in various places around the town and this will be a high-quality facility for them to improve their skills. It will be much better than the old one, which was pretty poor by comparison and hardly befitting a town like ours.

“Skateboarding will feature as an Olympic event at Tokyo in 2020 and Henley is already home to world-class rowing so hopefully we will become a home for world-class skateboarding too.”

Henley town, district and county councillor Stefan Gawrysiak said: “We’re on track to open the skate park on schedule and I’m sure Maverick will do their best to open it as early in the school holidays as possible.

“The build is being monitored by an independent property consultant to ensure it is completed to the highest possible standard, which will also ensure that the public money invested in this project is protected.”