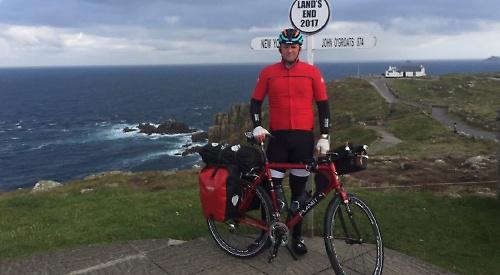 A MAN from Henley is cycling 3,500 miles around the British coastline for charity.

Sam Hayes, of St Andrew’s Road, will visit more than 170 lighthouses on his journey, which he started at Land’s End on August 9 and is due to finish on October 23.

He has already ridden more than 2,000 miles and taken a photograph of himself at 155 lighthouses which he has uploaded to Twitter for his friends and supporters.

Mr Hayes, 27, a former sports massage therapist and bicycle mechanic for Team Sky, cycles up to 90 miles every day and stays at hostels or B&Bs in the evenings.

He has no support crew and has had only three rest days so far.

He hopes the Lighthouse Tour will raise at least £1,200 for the Campaign Against Living Miserably, which aims to reduce suicide among young men.

Mr Hayes, who attended Gillotts School and The Henley College, is taking a career break and wanted to use his free time usefully.

Speaking from Liverpool on Friday, he said: “I’ve travelled a lot within the UK for work but never for pleasure so it was a chance to see the country in a different light.

“I thought that stopping at lighthouses was a good way of making sure I stuck to the coastal routes. At first I just took pictures but people wanted to know more about them so I’ve started uploading a few facts as well. If they’re open to the public, I try to go inside and find out more about them.

“The ride has been really fun and I’ve been unbelievably lucky with the weather. People are very interested in what I’m doing. My mates have taken the mickey a bit, saying all I’m uploading is endless selfies with lighthouses, but I’m getting lots of texts and emails of encouragement.

“Some days are easier than others but I try to make sure I cover a certain distance every day.

“I feel pretty good in the mornings — I’m not always in the mood for cycling first thing but after a cup of coffee and a bit of breakfast I’m ready to go.”

Mr Hayes said that when he has finished the ride he will be taking a short break in Lanzarote, where he will do some more cycling.

He then hopes to train as an army officer at the Royal Military Academy Sandhurst.